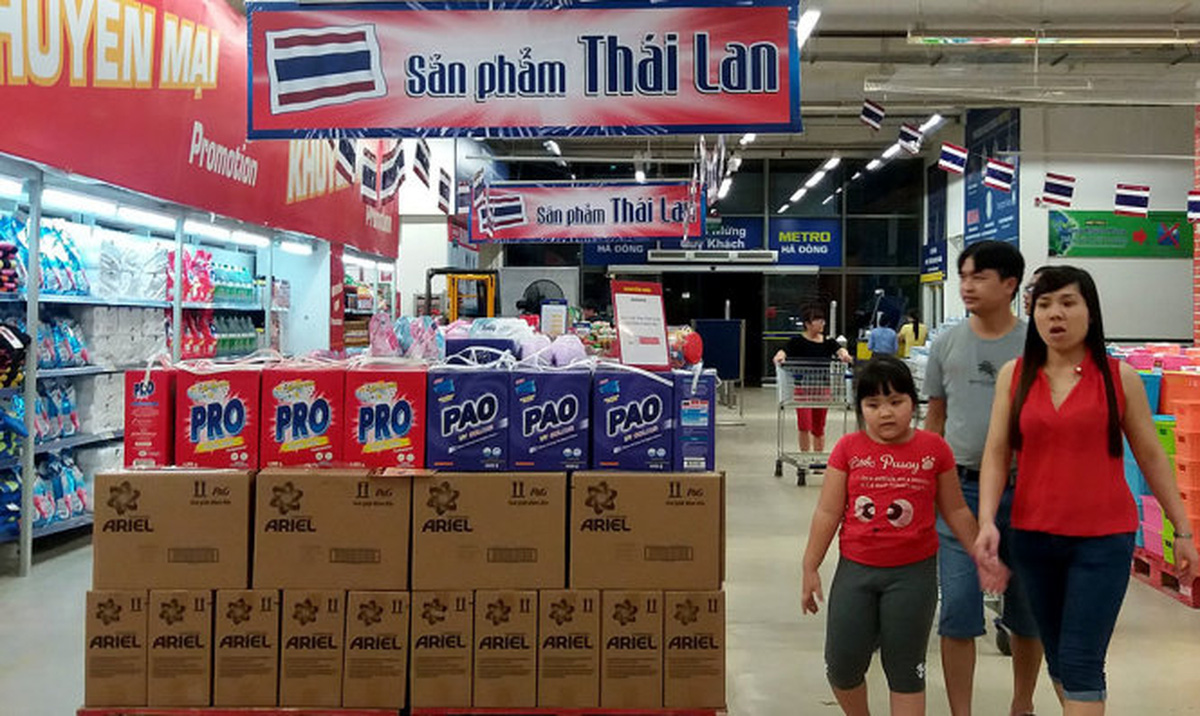 Vietnamese consumers have shown a decreasing interest in and have purchased fewer locally made products over the last year, while Japanese, South Korean and Thai manufacturers have begun to replace Chinese counterparts as the preferred foreign brands for Vietnam.

Only 51 percent of Vietnamese consumers surveyed by the Business Association of High-Quality Vietnamese Products said they still ‘love’ Vietnamese-made products, a 27 percent decrease from the 2017 poll.

Sixty percent of respondents said they still purchase locally made goods on a frequent basis, a 32 percent decline compared to a year earlier.

The association selected 640 local businesses for the award this year, after polling 3,000 retail outlets and 13,000 households in a 3.5 month-long survey.

While the survey findings provide several new market insights, they also raise fresh concerns about the weakening competitiveness of Vietnamese-made products, Vu Kim Hanh, chairman of the association, stated during a conference in Ho Chi Minh City on Tuesday.

The more Vietnamese consumers lose faith in locally made products, the more opportunities for foreign brands to enter the market and beat Vietnamese businesses on their home soil are created, Hanh warned.

A meager 0.6 percent of respondents said they are wary of Chinese goods, with Thai, Japanese and South Korean manufacturers grabbing this golden chance to win the choice of Vietnamese consumers, according to the survey.

Less than three percent of respondents in the 2017 survey said they would buy Thai, Japanese and South Korean goods on a frequent basis, but the figures now range from eight to ten percent in the latest poll.

This trio of countries make up from 12 to 17 percent of real purchases made by Vietnamese consumers in the confectionery sector alone.

As well as a higher product quality, foreign brands are able to penetrate deeper into the Vietnamese market because local consumers are losing faith in made-in-Vietnam products.

Many Vietnamese manufacturers continue to undertake business in a dishonest and non-transparent way, losing trust among local consumers.

The phenomenon is well exemplified by the scandal of Khaisilk, which sold products made from Chinese silk rather than Vietnamese material as claimed.

On the other hand, genuinely reputable Vietnamese brands are busy dealing with counterfeits and copycats.

While Vietnamese businesses are hit by these problems, Thai, South Korean and Japanese brands have actively expanded their foothold in the country’s retail network and launched repeated promotional campaigns to attract customers.

Thailand is also present in the Vietnamese retail market with the B’s Mart convenience store with 75 locations, the Big C chain with 32 supermarkets across the country, and the electronics chain Nguyen Kim, now 49 percent owned by Thai conglomerate Central Group.

In the meantime, Japanese goods reach Vietnamese consumers via a wide network, ranging from the Aeon Mall chain and Saigon Centre to the Family Mart and 7-Eleven corner stores.

Similarly, giant South Korean retailers including Lotte, Emart and SG25 have all marked their presence in Vietnam.

Even when they are already present in Vietnam, businesses from Thailand, South Korea and Japan still actively participate in all international fairs throughout the country to seek new partners and cooperation opportunities.

“These businesses are sponsored by their respective governments and so they have seriously taken part in international trade fairs,” Nguyen Khac Luan, general director of Vinaxad, a trade fair organizer, said.

“For instance, with support from the Thai government, more Thailand trade fairs will be held in Vietnam on an annual basis than similar events to promote Vietnamese goods.”