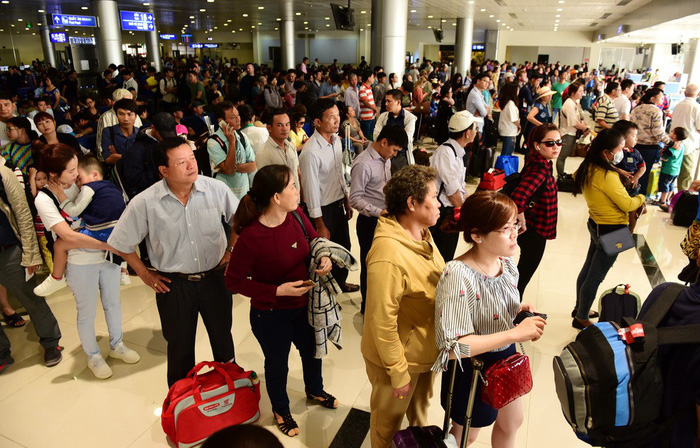 Even though two of Vietnam’s biggest airports each has a deteriorating runway that urgently needs to be repaired and upgraded, a lack of funding has prevented any works from getting started, the agency overseeing the country’s airdromes said in a recent report.

One runway at Ho Chi Minh City-based Tan Son Nhat International Airport, and another at Hanoi’s Noi Bai International Airport are being deployed beyond their designed capacities, with serious cracks developing on their surfaces, the Airports Corporation of Vietnam (ACV) said in the report sent to the Ministry of Transport.

The runway 25R/07L at Tan Son Nhat was once repaired in June 2013, after which it was said to be capable of serving 55,100 turns of takeoff and landing of large aircraft such as Boeing B777-300 ER within ten years.

But only five years later, the number of takeoffs and landings on this runway already surpassed 126,000 as of April this year.

Both runways are now in serious degradation with broken and cracked surface due to the overloading.

“During rainy seasons, some parts on the runway 1B often become marshy,” a leader of ACV said.

The official underlined that should repairs works for both airstrips continue to be delayed, flight safety will be threatened.

“In the worst-case scenario, the runways will have to be closed, putting more pressure on the other runways at the two airports and affecting operations of airlines,” a representative of an airline said.

“In April, the Da Nang International Airport only had to temporarily close for 30 minutes in the morning to have its runways repaired, but many flights had to be delayed,” he added, implying that the consequences would be much more serious if this is the case for such busy airports as Noi Bai and Tan Son Nhat.

Despite the urgency, relevant agencies are still at odds over how the runway upgrades will be funded.

Do Tat Binh, deputy general director of ACV, argued that runways are categorized as government assets, so the upgrades should be financed by the state budget.

But the transport ministry has sent a written dispatch to ACV, tasking it with finding feasible funding solutions for the runway repairs, Binh added.

“The ministry also said ACV is responsible for temporarily fixing the current damages on the runways while waiting for money to start the official repairs works,” he said.

Repairs for the two runways are expected to cost some VND4.2 trillion (US$184.8 million).

Binh said ACV rakes in some VND1trillion ($44 million) by charging airlines for landing and takeoff fees at airports across the country, but all the money is required to be send to the state coffers.

“Even though we are allowed to retain the money, it is still far from sufficient to afford the $184.8 million upgrades,” he said.

Meanwhile, according to the Civil Aviation Authority of Vietnam (CAAV), the department is still drafting the mechanism on operating airport infrastructure facilities, and will submit this report to the Transport Ministry in August.

Until that point, it remains unclear how infrastructure facilities such as airports’ runways will be managed and operated, and what role ACV will assume - whether it will be tasked with repair and maintenance, or investment.