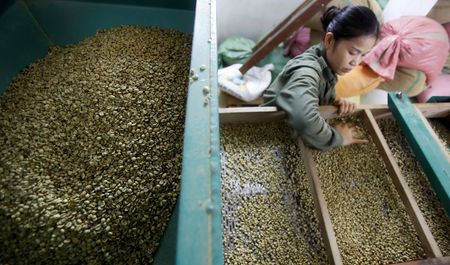 Coffee prices in Vietnam hovered around a near four-year high this week, following cues from international markets, while harvest was coming to an end in some parts in Indonesia, traders said on Thursday.

"The upbeat London prices were a result of global fears over robusta beans shortage when Vietnam is under months long coronavirus lockdowns," said a Ho Chi Minh City-based analyst.

"But lockdowns don't have huge impacts on beans exports due to dwindling stocks at the end of the season. On-year exports plunge in the first eight months was due to container crunch and higher domestic demand," he added.

Some parts of the coffee belt are currently under movement curbs although farmers said they were still allowed to go to their coffee farms to take care of their trees.

"Activities at port are also normal amid curbs although trade is tepid. Vietnam still managed to export 100,000-120,000 tonnes monthly," a trader based in the coffee belt said.

Traders in Vietnam offered 5% black and broken grade 2 robusta COFVN-G25-SAI at a discount of $250 per tonne to the November contract, higher than the $180-$200 discount range in late August.

Indonesia's robusta beans were offered at $200 discount to the January contract. The discount was $150 to November contract, a trader based in the region said.

The discounts were widened due to the recent uptick in the benchmark prices while supplies remained abundant in Lampung province, traders said, adding, harvest was coming to an end in some areas.