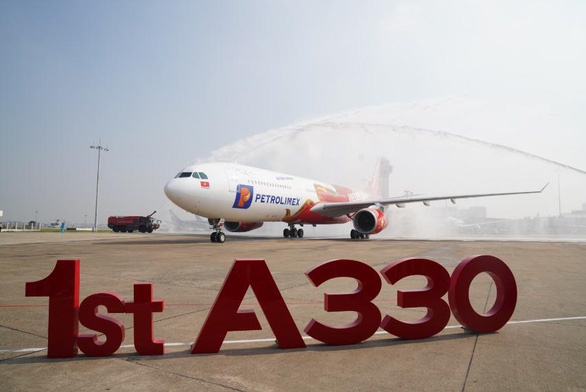 Vietnam’s low-cost carrier Vietjet Air has added the first wide-body A330 aircraft to its fleet after ten years of operation, making it ready for global flight network expansion and new passenger service experiences.

The Airbus A330-300 aircraft, with a soft and iridescent golden silk strip livery, landed at Tan Son Nhat International Airport in Ho Chi Minh City on Saturday morning, in celebration of the 10th anniversary of its first flight, the carrier said in a press release the same day.

The golden silk strip symbolizes the cultural quintessence of Vietnam and Asia, the carrier explained.

The new aircraft, registered as VN-A811, is furnished with comfortable and spacious leather seats, along with a quiet cabin in 12 business-seat and 365 normal-seat configurations.

With this first wide-body plane, Vietjet has become the third airline in Vietnam to own this type of aircraft, after Vietnam Airlines and Bamboo Airways.

The firm is expected to equip its fleet with two more A330 planes early next year to diversify and synchronize operation on long-distance flights.

Three new A330s will be used by the airline to operate commercial routes connecting Vietnam with Russia, India, and Japan.

They can cover from medium-haul trips to true long-range distances of up to 11,750km with fuel-efficient and eco-friendly operations, the firm said.

“We are delighted to mark our 10th anniversary today with an A330 aircraft’s arrival, which will help Vietjet grow significantly in operation capacity and international footprint expansion,” Vietjet managing director Dinh Viet Phuong said.

Over the past years, the carrier’s fleet of A320 and A321 has carried more than 100 million passengers on tens of thousands of flights across Vietnam and the Asia-Pacific region, Phuong said.