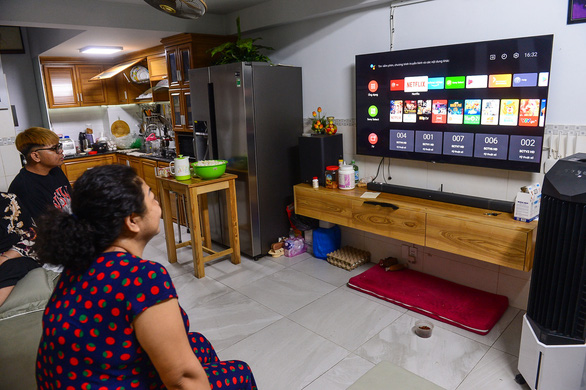 OTT services – which refer to video, television or film content that viewers can access with a high-speed Internet connection instead of a cable TV or satellite TV subscription – provide users with more topics and categories than traditional television contents.

TV sets were turned on almost all day in numerous families in Ho Chi Minh City during the time of social distancing at different levels due to COVID-19 from May 31 until the end of September last year, before the country began to reopen the economy in the new strategy of living safely with the coronavirus, according to a survey by Tuoi Tre (Youth) newspaper.

During that period, two daughters of Nhat Vinh, a resident in Ho Chi Minh City, had to stay at home all day long and they often relaxed themselves by watching TV, besides playing with smart phones and tablets.

“Adults did the same if they had free time,” Vinh said.

“My family is fond of OTT services such as Netflix, ClipTV, FPT Play because these applications have more options for movies and entertainment programs than traditional TV services.”

Similarly, Thanh Dan, residing in District 7, also said that the time spent by his family members on TV watching has increased remarkably.

“We mainly use three services. I usually use ClipTV to follow VTV1 news every morning. We allow our children to watch TV for two hours a day from 8:00 pm, mostly with Netflix Kids and YouTube Kids channels,” Dan said.

In addition to information about COVID-19 developments at home and abroad, leisure and entertainment contents account for most of the remaining TV viewing time of households in the southern city, the survey shows.

“Of course, traditional TV series and movies are unlikely to disappear, but the recent strong development of OTT has forced producers like us to think of creating OTT products, which require different conditions and standards from traditional products,” Xuan Phuoc, a film director, told Tuoi Tre.

OTT service users pay monthly for their films on OTT plartforms, so they want the visual and audio qualities of OTT films to be equal to those of theatre films, so that they can view them clearly on TV sets with large screens, said film and TV show producer Do Quang Minh.

Asia and Southeast Asia in particular are rapidly growing home entertainment markets amid the pandemic, so foreign OTT platforms are very interested in doing business there, Van Cong Vien, another firlm director, said.