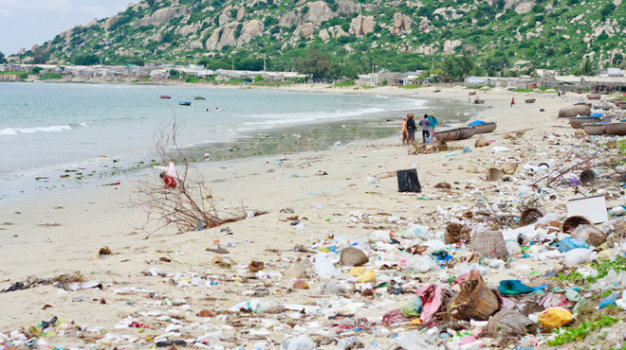 Beaches in Vietnam now seem favorite places not only for people to swim or enjoy seafood but also to litter all kinds of rubbish, from broken glass, leftover food to plastic bags.

Even worse, some adult tourists see the beaches as a kind of public toilet.

A cousin of mine once told me he was surprised to see a little child jumped up from a swimming pool and rushed towards a toilet, and later returned to swim again.

The reason for his astonishment is the good behavior of the kid, which is arguably a strange practice for most people, except a small bundle of foreign tourists, here in Vietnam, who will just do it right under water.

The little child was only a second grader of a private school in the southern city of Bien Hoa then.

He admitted to me later that he was told by a foreign teacher in his English class that he should not do it in swimming pool, beaches, and other public places.

If this child goes to several beaches in Vietnam, I guess he too will be shocked seeing what most people do there.

At Bai Truoc, one of the beaches in the coastal city of Vung Tau, some 80km from Ho Chi Minh City, fragments from broken glasses are scattered on the sand while children and tourists are playing around.

These glass fragments are left on the beach by tourists who eat and drink right on the seaside, a common practice in Vietnam.

Tourists usually hire seats under big umbrellas on the beach to enjoy their food after swimming.

But it must be unfair to blame only tourists for the littering, as fishermen, street vendors, and locals also add to the problem.

Just imagine how Vung Tau beaches will become after a weekend when thousands of people flock there, and dump garbage everywhere they go.

Such an issue can actually be spotted everyday in Vung Tau.

Another time, I saw some of my relatives told their children to “answer the call of nature” right on the beach for “saving time” instead of going to the restroom.

But I did not have the courage to intervene, fearing I would shock them.

Good news is Vung Tau authorities are not in the dark about the situation.

Last week they started a campaign to encourage both tourists and locals not to litter in public places. Vung Tau authorities began punishing violators since Wednesday last week.

It should be noted, however, that many campaigns like this have been launched across Vietnam, but the results are not so positive.

Littering in public places has indeed raised the eyebrows of many people, but these are, sadly, only a minority among the community.