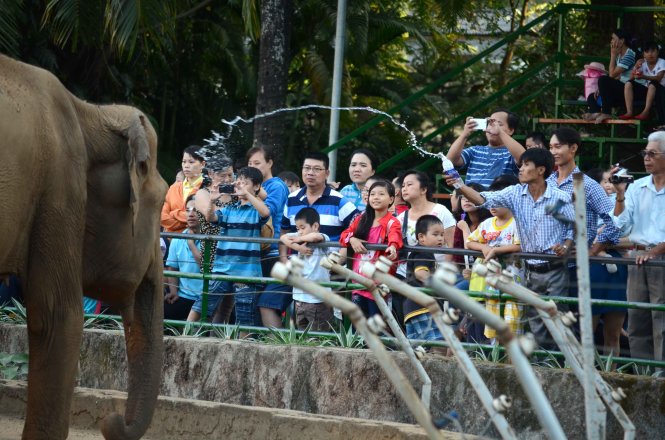 Editor’s note: After a visit to the zoo in Ho Chi Minh City with a heavy heart, Hoang Nguyen wrote this piece to Tuoi Tre (Youth) newspaper to recall how badly animals at the park were treated by misbehaving visitors.

Nguyen, a Ho Chi Minh City resident, visited the District 1-based park, fully known as the Saigon Zoo and Botanical Garden, during the Lunar New Year (Tet) holiday that ended last week, only to see the landscapes tainted with trash and the animals abused by visitors.

In recent years, many people have raised the alarm on the fact that wild animals at the Saigon zoo are suffering immensely – from narrow cages to light and noise pollution. But these nuisances are nowhere near the torture they endure on a daily basis from visitors.

At the elephant exhibit, I witnessed visitors relaxingly throwing cut sugarcane stalks onto the mammals and shouted excitedly whenever the objects hit their heads.

Meanwhile, the white tigers, though known as the ‘lords of the forests,’ were constantly ‘challenged’ by many visitors, who tried to scare the animals away by either knocking their hands on the tempered glass surrounding the cage, stomping their feet, or shouting at their faces.

But the worst suffering was on the crocodiles. The crocodile exhibit section is designed as an open space where visitors can walk across the area on a bridge and watch the reptiles from above, instead of through the cage bars. The consequences: the crocodile area was full of drink bottles, beer cans, confectionery packets and many other types of trash.

I even saw several half-eaten longan fruits on a crocodile’s head, and it was not difficult to tell from the scene that a bunch of the fruits had been thrown at this poor animal.

Visitors rest on the lawn at the zoo in Ho Chi Minh City.

Across the zoo, there are more than a dozen restrooms and numerous bins, at the most convenience for visitors, but few would ever use them. I am wondering whether it was because they wanted to ‘save’ a few steps to approach the bins or because it was their deep-rooted habit of littering.

A lot of visitors threw away their leftover food and all kinds of trash wherever they walked by, and they allowed their kids to pee onto precious ancient trees that need special protection across the zoo.

I am wondering, again, that how many of those parents would know that by doing so, they were shaping the habit and behavior of their children?

Then came the camel exhibit area, separated from the main roadway by a narrow fenced passage full of thorny leaves of wild pineapples. The design is meant to stop visitors from approaching the cage, but this measure just did not work.

Many visitors did not bother to step onto those thorny leaves – and they indeed destroyed the whole area – to stand next to the cage and let their kids feed the camels with cakes, sausages and fish balls. Some other adults would pick leaves from the nearby trees and fed the animals.

The passage of wild pineapples was destroyed by visitors in front of the camel exhibit.

All these acts of teasing and feeding the animals took place just beneath warning signs that visitors should not do so. Are they illiterate?

And yet next to the ‘Don’t Step on Grass’ signs, written in Vietnamese, on the lawns throughout the park were a sea of people resting, sleeping and even throwing drinking parties on plastic sheets.

I know it is hard to blame the zoo management for this, given that the number of visitors during Tet was way higher than usual and beyond the security’s supervision capacity. But I believe even when there were more security guards on duty, they might still be unable to stop the misbehavior from such a huge number of people!

The Saigon Zoo and Botanical Garden, one of the oldest zoological parks in the world, is not simply a place for recreation but also one where we, particularly children, get to know about the world of nature as well as flora and fauna species.

That the zoo space is occupied by noisy entertainment areas plus fast-food, souvenir and ice-cream stalls is already terrible for the park. We do not need trash and misbehavior to make things worse.

Have anything to add? Write to ttn@tuoitre.com.vn.

'This snack always leaves me satisfied, it never fails. It’s something you eat once and then crave forever'