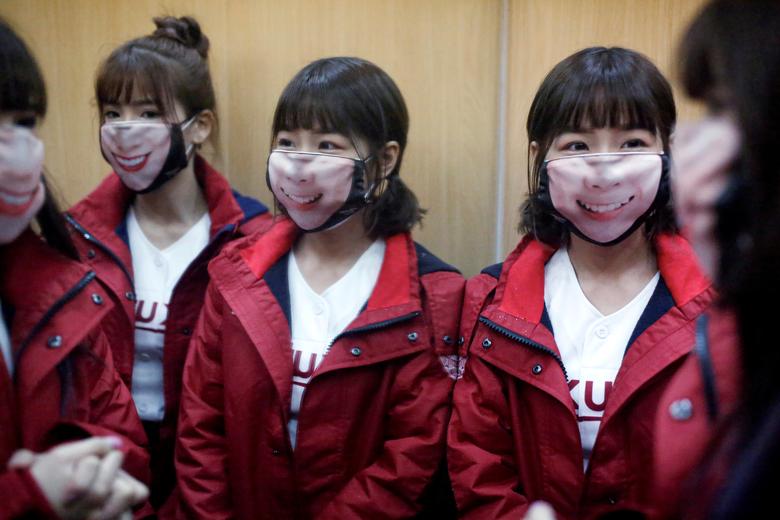 Less lipstick, at least for a while

Pundits are weighing in all over the world about the recession we’re in, expounding on the eventual recovery: V-shaped (a dip followed by a rebound resulting in a stronger economy than before the recession), U-shaped (decline followed by a return to previous levels), or L-shaped (recession followed by a slow and lengthy uptick, possibly never reaching the original state again) are the most popular recovery modes.

When COVID-19 hit China, lipstick use decreased dramatically as the populace donned masks, thus rendering bright, red, shiny lips pointless since most of the time they weren’t visible.

Turned out that was temporary, lipstick use rebounded, yet it remains less popular than previously.

Interestingly, the slack in sales has been complemented by the introduction of trendy new face masks, now all the rage.

The masks feature designs on the outside including various mouth shapes, some juicy and bright, plus cool patterns and artwork.

The slick new masks will be red hot at the beach this summer, now integrated with two-piece bathing ensembles to create a “trikini”.

All this leads me to bet on a “lipstick-style” recovery, which is a variation on the V- and U-shaped recoveries noted above.

You haven’t heard of the “lipstick-style” from higher economic circles, undoubtedly because I just made the term up (along with NoCo, LowCo, and HiCo denoting the levels of penetration of the virus in destinations and countries).

The gist of the lipstick-style recovery is new products will come on board and take some of the market share of traditional products, with the net end result being more or less the same, possibly with an overall increase in spending.

Some products, services, and daily activities may eventually become obsolete over time as consumers turn to different gadgets and tools.

Those face masks are already a fashion statement, much like the black-framed glasses without prescription lenses so many are wearing these days.

Lipstick is an innocuous example, but it symbolizes how daily life and the products we use are changing.

Skip the lipstick! Add a mask! Customize masks for your moods and wardrobe selections! And, presto, a new consumer fad is born.

After some initial confusion regarding their true benefit against spread of the virus, many countries now make donning a mask in public obligatory, which serves to fuel the creative minds to invent even more designs.

There is no returning to normal as we knew it, just as there is no clear line to be drawn in the sand indicating the end of this pandemic.

Things will never be the same: Experts warn us that a new strain is likely to appear, and even if it doesn’t, we’ll need to be aware and prepared for it, whether it comes in one year or five — a fundamental behaviour shift.

I have been secretly wishing that there will be no return to normal, this being a great opportunity to rationalize and improve lifestyles and habits, question all that we do and why.

The first opportunity that pops into my mind is video conferencing in place of habitual business trips.

I confess I was one of the worst offenders, always preferring the personal touch, the handshake, wanting to show business partners they were important enough to make a long journey.

Those days are now over, if only because of the risk to employee health coupled with the cost of travel.  Those travel requests that your boss used to sign with just a passing glance will go under a microscope because many companies are in dire financial straits.

Insurance companies will get involved (if they aren’t already), designating frequent travellers and HiCo destinations as high risk and adjusting premiums accordingly.

It’s a case of “old habits die hard”, the truth being we’ve had very robust video conferencing tools in place for over twenty years, but haven’t taken full advantage of them for many reasons, the biggest being procrastination, followed by a thirst for travel, then a desire for the chemistry that goes with in-person meetings.

Business trips minimization is the just the tip of the iceberg: How about the daily mad dash to and from the office?

The current crisis presents an ideal opportunity to rationalize which work is done where and why, instead of automatically reverting to old habits.

A big obstacle in the way of telecommuting is getting buy-in from management to allow professionals to work remotely, especially here in Vietnam where the motto is often “seeing is believing”.

When I worked in Silicon Valley in the U.S., the traditional hotbed of high tech gadgets, companies shifted gradually toward telecommuting, mostly because of the horrendous traffic on the roads.

In recent years it became an unwritten rule of protocol to not organize on-site office meeting on Fridays, with Monday also seeing lower office attendance.

People were working their butts off as always, that part of the world being a real sweat shop, but they just weren’t visible in the office — strange at first, but later it became an accepted norm.

Google Meets is the turbocharged version, allowing up to 250 participants and offering some additional slick features.

Google Classroom is an application that streamlines the management of school exercises, allowing easy creation, distribution, and grading of assignments.

Teachers create specific classes, then invite students, who can join using a code distributed with the invitation.

The same principle also apply to distance learning. Dozens of pre-schools all around Vietnam have closed up recently due to parental concerns about social distancing.

Having kids take the habit of going outside the home at an early age is a great idea — gets them used to the world outside, but the risks aren’t worth it for many parents these days.

Small, informal neighbourhood kid’s groups are being formed and combined with self-study using the plethora of tools available.

Any kid would learn a lot and have fun in the process. Gee, we only had books like Chicken Little and Noddy Goes to Toyland (starring Constable Plod) when we were kids. Oh, how things have changed.

Vietnam punches far above it’s weight class on any scholastic aptitude scale, scoring as well as Canada, the U.S., and many European countries despite its economic disadvantage.

Kids study hard, parents are heavily involved and work closely with teachers to monitor progress, and Internet access is a strategic tool widely available, all of which are conducive to distance learning.

These concepts aren’t black and white, easy to implement on a moment’s notice, but every step in the right direction is progress.

Maybe it’s realistic to work from home just one day per week for some professionals, but that still means saving 20 percent on all forms of wear and tear, including time, money, and stress.

Same goes for school: A group of five families living in the same neighbourhood could take turns hosting a small group of tots, each parent staying home only one day per week.

Friends overseas have gone to home schooling, with each parent working from home three days per week to lead the way.

The parents burn the midnight oil when the kids sleep so that they’re available to mentor in the daytime, then take rest when the opportunity arises.

So far, students seem less motivated when studying remotely than when they’re in class, given all the positive dynamics and teamwork that come into play when they’re all in the same room, but hopefully that’s a short-term issue.

We can’t stay home 24/7 and become hermits, but at least we can take calculated risks in various social situations, then weigh out benefits and savings versus any compromise in results.

Awareness of the risks of exposure when we’re outside the home is the first step, so even if we can’t make immediate improvements, we can at least take on the habit of identifying and avoiding the big risks whenever possible.

Change doesn’t always come gift-wrapped on a silver platter, nor do we reach the desired end state in one gigantic leap.

Rather, it’s a bunch of small steps over time, and we always start with that first stride.