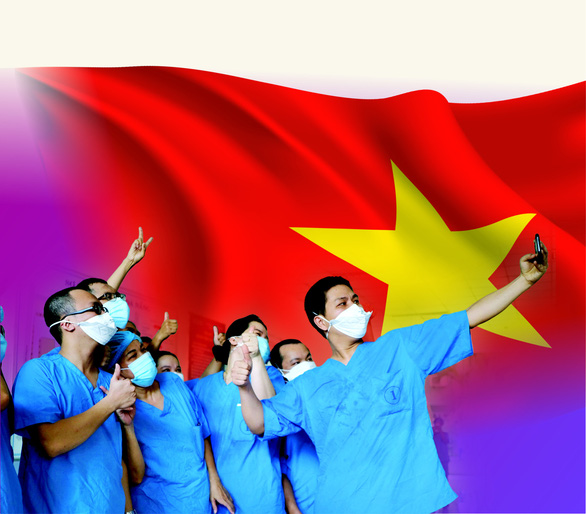 So, what’s with all the flashy red and yellow starred flags?

Whenever the nation celebrates a significant holiday, the locals put out the flags as a patriotic gesture.

One of the two biggies during the year is Reunification Day on April 30, which marks the end of the American war in Vietnam and the political reality of one nation finally joined together. The day is also labeled ‘Liberation Day’ or ‘Victory Day.’

Some Vietnamese actually refer to August as ‘the start of the revolution’ – beginning the process of making the country whole – even if that would take another thirty years to become reality. For most of its history before then, Vietnam had been carved up, divided, sliced and diced, and invaded more times than just about anyone else.

From the Vietnamese point of view, National Day and the events leading up to it represent the end of what they called ‘colonial slavery’ and invasions, while symbolizing the dawn of the population’s long-held wish to rebel and become one nation. Many foreigners don’t know or realize that up to 1945, Vietnam had been occupied by the French colonialists for nearly a hundred years, so a declaration of independence was like a jolt of electricity. It’s often referred to as the ‘general uprising’ which probably gives a better sense of what was going on.

Sadly, the ‘French war’ and the ‘American war’ ravaged Vietnam and delayed liberation until the Americans left.

No wonder they’d celebrate the end of all of that!

Like most events here, every town, city, and village will have some sort of event to mark the occasion. There were speeches, parades, fireworks, and a huge parade at Ba Dinh Square in Hanoi in the past. In Hanoi, the Ho Chi Minh Mausoleum and Ho Chi Minh Museum are popular places to visit. Large fireworks displays were featured in Ho Chi Minh City in previous years but that would be unlikely this year due to COVID-19 restrictions.

One thing is for sure, even if there are restrictions, you can bet there will be thousands roaring around on their motorbikes, waving their national flags and making a heck of a lot of noise!

Apparently, anyone who has to work on that day also gets a nice salary bonus!

One question will be those quick trips to hometowns – even more vital now as touching base with loved ones brings relief from stress and a change to unwind. For most of the country, travel is still possible back to their origins although it will be a hard task for folks in central and northern Vietnam still experiencing social distancing. If I had the chance myself, I’d go back to Phong Nha-Ke Bang National Park (the big cave area), as the countryside around there is amazing yet somehow soothing.

Anyway, the greatest thing about this day is simply the feeling of freedom from oppression that was finally achieved. Modern Vietnam is prosperous and busy. Yes, we all know about COVID-19, but compared to many countries, Vietnam is still doing well with good prospects for economic recovery in the coming year.

Did you know that President Ho Chi Minh was a keen poet? To round off this article, I reckon I’d include two thoughts from the great leader about freedom.

The body is in jail. But the spirit, never. For the great cause to prevail. Let the spirit rise forever!

And believing better things will happen in the future:

Everything evolves, such is the law of nature. After days of rain, here’s fine weather coming! Joy fills man’s heart as well as the universe. After the bitter comes the sweet: so runs the course of nature.