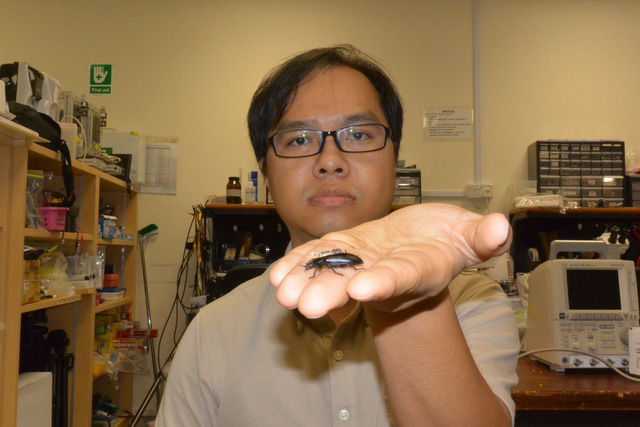 A research team consisting of two Vietnamese has created an ‘insect-computer hybrid,’ or a kind of ‘living robot’ the size of a beetle.

Thang is a post doctoral researcher under the Fellowship for Research at Biological Machine Laboratory at NTU, while Hien is an undergrad.

The research team used a living body of a beetle to develop their project - a remote-controlled beetle.

The partially robotic beetle, capable of conducting movements accurately and precisely the way scientists wanted it to, is by far the world’s smallest, measuring 2-2.5 centimeters, and weighing only one gram, with the chip and battery included.

Such advantages in size and weight enable the remote-controlled ‘living robot’ to easily access complex topographical landscapes. The robot therefore has potential for use in assisting human rescuing missions especially after natural disasters.

The beetle has a wireless chip on its wings and electrodes installed on each antenna. The electrodes will produce electric waves to stimulate bug’s nerve cells in the antenna causing avoidance response making the beetle move in opposite direction of the stimulated antenna.

In other words, when the scientists stimulated the left antenna, the beetle started moving to the right and vice versa. Stimulating both antennas will make the beetle take a step back.

The project was sponsored by NTU’s startup fund, Singapore’s Ministry of Education and a research program for university students.

All of the equipment needed for the controlling devices cost around SG$10 (US$7.4) in total.

In the video provided by the research group, the black line represents the beetle’s free movement without being stimulated.

Thang, PhD, said it is costly and time-consuming to invent a robot as small as an insect. This is why the research team had ‘borrowed’ an insect's living body to be able to use the shell, muscles and natural nervous system, the researcher added.

Thang said that the electric waves used to stimulate the insect were in a low voltage (2.5V) and should not affect the insect’s natural living pattern other than forcing it to move at the researchers’ wish.

These are basic steps to precisely control the movements of living robots, paving the ground to develop autonomous robots.

“We hope that in the future, this robot will be able to make its way through small cracks in wreckages after natural disasters to make searching efforts easier and more efficient than any other robot,” Thang said.

The robot bug is currently remote-controlled and has yet to be equipped with any cameras or sensors. However, sensor equipment is crucial if the robot is to put in use on scene, as it will allow the robot to identify its location.

Making insects and bugs to fly or move in accordance to human’s will emerged as a research field at the University of California Berkeley (United States) in 2007, before NTU showed interest in the field.