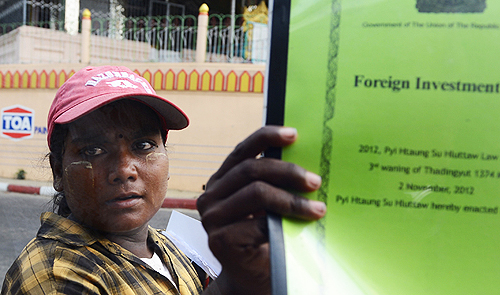 An abundance of business chances in emerging Myanmar awaits international investors. However, the challenges may also be more difficult than estimated.

Recognizing the chances is a job of investors, but surviving in the country requires effort.

Thousands of Vietnamese enterprises have entered Myanmar to find business chances, but only a small number has been granted certificates of license for operations, according to Chu Cong Phung – former Ambassador Extraordinary and Plenipotentiary of Vietnam in Myanmar.

He admitted that the potential in Myanmar is ‘extremely huge,’ and urged Vietnamese firms not to be discouraged by the challenges.

Electricity supply in Myanmar is an example of something foreign investors should consider as a stumbling block for business. Only 26 percent of Myanmar’s population has access to electricity. In fact, the power problem has driven away many international manufacturers who had been enthusiastic about entering the market.

The government hopes to increase capacity by 16,000 megawatts (MW) by 2030, or approximately four to five times the current capacity. A master plan for the industry is being developed, but it is not due to be completed until June 2014, according to the Bangkok Post.

Eximbank of Vietnam is planning, along with a local manufacturer, to set up a factory to produce electricity generators, priced from US$500 – 1,000 a unit, to meet the rising need for power in Myanmar.

An obvious change in Myanmar can be seen on the streets, which look like they are steadily becoming narrower thanks to the flood of newly-imported cars.

It takes a taxi almost an hour to cover the short distance from the Sedona Hotel to the Boyoke precious stone market in Yangon. This trip costs 5,000 kyat, or US$5. Travelling from the same hotel to the Shwedagon Pagoda takes 45 minutes, though the taxi costs only $3.

Many streets in Yangon are now packed with cars moving along inch by inch.

The only difference between Yangon and Ho Chi Minh City is that it has no motorbikes revving up in endless lines as Yangon has banned scooters. The sound of honking horns is also absent, and drivers wait calmly on busy streets.

Though road construction is prevalent, it is failing to keep up with the heavy demand of locals.

Besides the ‘specialty’ of traffic congestion, expensive housing has added another headache to foreign investors in Myanmar. In the past year, house rental prices have surged two to three times their previous rate.

In fact, the prices are not far behind those in Hanoi or Ho Chi Minh City.

Doan Nguyen Duc, chairman of Hoang Anh Gia Lai Corporation, rents two villas in Yangon, each of which is 150 square meters, for a monthly price of US$5,500 each.

“Now, the price is even higher and some investors have not been able to find a house to rent,” said Duc. Last year, a 1,000 square meter villa in the area called ‘the golden valley of Yangon’ cost $2,000 a month.

Another issue is that the legal procedures to import machines and other equipment for construction require effort, time and patience.

It is ‘so complicated’, an investor admitted.

At the groundbreaking ceremony to start the construction of the Hoang Anh Gia Lai Myanmar Center on June 5 in Yangon, Tran Bac Ha – chairman of the Bank for Investment and Development of Vietnam – called on local authorities to facilitate import procedures.

“The import of necessary machines to build the center may last a year with the procedures,” Ha said at the ceremony.

Since it only came out of isolation two years ago, Myanmar has not yet fully worked out its laws and regulations.

It is still not possible to make bank payments via the internet, in Myanmar, as the local system has not been connected with other nations.

Van Duc Muoi, general director of food processing firm Vissan, described a common rule: that an investor arriving in Myanmar finds business chances everywhere the first time, recognizes challenges and becomes discouraged on the second visit, and will surely have solutions if he comes a third time.

Working with local enterprises is one of the solutions, as they know what to do and where to do it.