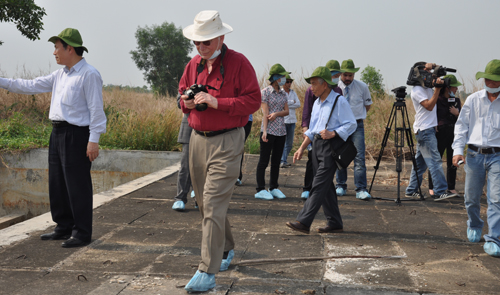 Agent Orange/Dioxin contamination at Bien Hoa airport in the southern province of Dong Nai, formerly a major military airbase of the U.S. Army, is even worse than the alarming rate confirmed before.

More seriously, the toxic chemical was found flowing toward the Dong Nai River, just hundreds of meters from the hot spot, and in densely populated areas located alongside the river and airport.

Dozens of hectares, including five to seven hectares of ponds and lakes, at the airport have been found with dangerously high concentrations of dioxin, a pollutant that inflicts great damage on human health, causing cancer together with reproductive and developmental problems, and increasing the risk of heart disease, diabetes, and immune malfunction.

Apart from 13 sites at Bien Hoa airport confirmed of Agent Orange/Dioxin contamination, Vietnam has recently unearthed 28 other sites covering dozens of hectares at the facility seriously polluted with the toxic chemical.

The 28 new sites probed at the airport were all confirmed to be contaminated with Agent Orange/Dioxin, according to the National Steering Committee on Tackling Consequences of Toxic Chemicals, or Committee 33, the body under the Vietnamese government in charge of coping with the consequences of toxic chemicals used by the U.S. during the war in Vietnam.

Of the 28 new sites, sixteen were identified as seriously polluted, as they surpassed the rate of 8,000 parts per trillion (ppt), Nguoi Lao Dong newspaper said in an article published on March 23.

This is eight times higher than the recommended level.

Notably, soil samples just 30 cm under the ground at the airport were confirmed to contain a high density of the military herbicides, Nguoi Lao Dong reported.

The highly polluted sites are located along the land belts to the west, east, and north of the airport.

Scientists have warned that the level of dioxin contamination at Bien Hoa airport is more complicated and more serious than at Da Nang airport and Phu Cat airport, located in Binh Dinh Province, in the central region.

Archives showed that during the U.S. war in Vietnam before 1975, the U.S. Army stored over 98,000 barrels, each containing 205 liters of Agent Orange/Dioxin, at Bien Hoa airport and thousands of other barrels containing other toxic chemicals and herbicides, commonly called Agent Blue and Agent White.

The report said the most toxic dioxin, 2,3,7,8-tetrachlorodibenzo-p-dioxin (TCDD), was found in the soil near lakes to the north and east of Bien Hoa airport.

Committee 33 called for more research and surveys of the former airbase in Bien Hoa to outline the problem and work out methods to treat it.

Over decades, the toxic substances have overflowed to the Dong Nai River, lakes, and residential sites bordering the airport.

Bien Hoa airport is the area most contaminated with Agent Orange/Dioxin in the world, said Le Ke Son, office manager of Committee 33.

He added that the committee would transfer the latest findings to the Ministry of National Defense for treatment and build up a comprehensive plan to coordinate with USAID in the future.

Since 2006, the defense ministry of Vietnam has worked out plans to treat Agent Orange/Dioxin pollution across the nation.

An area of 5,000 hectares at Bien Hoa airport was already detoxified. Previously, this area was where the warehouses containing the toxic substances were kept.

Almost 10,000 cubic meters of polluted soil at the depth of over a meter were buried to isolate the spread of the toxic soil. Vietnam is planning to complete the treatment and processing of the dioxin-contaminated soil at Bien Hoa airport by the year 2020, said Son, office manager of Committee 33.

“However, the risk of spreading the pollutants to other surrounding areas is still high,” said Dao Nguyen, head of the Dong Nai Province chapter of the Vietnam Association for Victims of Agent Orange/Dioxin.

“What authorities could do in the past years was to propagandize locals to dissuade them from keeping and eating fish and plants that grew in the polluted sites,” she added.

Vo Niem Tuong, a consultant of Committee 33 in Dong Nai Province, admitted to Nguoi Lao Dong, “My agency can only warn residents not to consume fish and plants found in polluted areas. Pollution treatment totally relies on central agencies.”