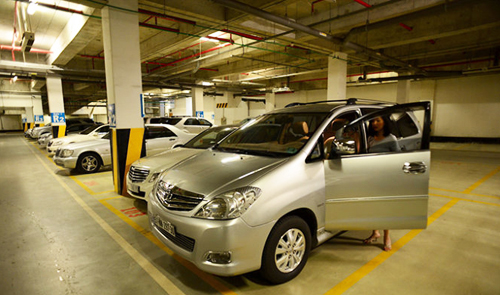 Disputes between apartment residents and developers have occurred in most apartment buildings in Vietnam because of ineffective enforcement of regulations. Most issues result from disagreements over the collection of maintenance fees in apartments.

This sounds like a simple problem, but it has occurred in countless apartments throughout the country in recent years. The issue is persistent even though the Housing Law came into effect in 2010.Maintenance fee rates

By law, the owner of an apartment has to pay an extra two percent of the total value of his apartment for the maintenance of facilities inside the building.

However, enforcement of this law is not always effective, since the involved parties have logical reasons to ask for a different number.

The Ruby apartment building, located in Ho Chi Minh City’s Binh Thanh District, is an example of such disputes.

Vietnam Land SSG, which is the investor of the Ruby apartment and the owner of a commercial floor and a parking lot with a total area of 5,000 square meters inside the building, has yet pay the maintenance fee of around VND5 billion (US$240,400) for its space.

As a result the building management board, which represents residents of the apartment, has threatened to cut the water supply to the commercial floor.

Vietnam Land SSG replied ambiguously that they see no basis for calculating the fees for the commercial floor, which offer services such as restaurants, supermarkets, and shops.

“The company should have paid the fee in 2009 when they handed over the apartment to residents,” said a member of the management board.

A Vietnam Land SSG representative said that his company did not mean to evade the fee, but just wanted to wait for further guidance from the Ho Chi Minh City Department of Construction.

He argued that the two percent maintenance fee rate is applicable only for residential areas, not for commercial and parking areas.

One issue that has risen from this argument is that Vietnam Land SSG, as the investor, ‘sold’ the commercial floor and the parking lot to itself ‘at a cheaper price they fixed’.

The question of who has the legal right to determine the genuine value of the commercial floor and the parking lot in order to set a maintenance fee remains unanswered.

However, the decision was intended to only distinguish the area for private ownership and the area for collective ownership. The owner of a private area must pay a two percent maintenance fee.

Who keeps the maintenance fee?

By law, an apartment buyer has to pay a maintenance fee of two percent of the value of his apartment within fifteen days of receiving the apartment.

But within that short time period, residents of a new apartment building usually cannot organize a meeting to elect their management board. Therefore, the maintenance fee is often collected by the apartment investor.

This is not a small sum, said Trinh Thuy Mai – a member of the management board of the Keangnam apartment building in Hanoi.

The Keangnam building has total residential and commercial areas of 150,000 square meters. Each square meter for housing is worth US$2,800. So, two percent of the entire area equals around VND200 billion ($9.6 million).

However, the building’s investor has cited numerous reasons for delaying the transfer of the sum to the management board of the apartment, said Mai.

Keangnam residents have not been told by the investor about the money and how they have spent it for years, she added.

“The Government should create a regulation to award the right to collect the fee to a certain agency before transferring it to residents’ representatives,” she said.

Residents of other apartment buildings in Hanoi, such as The Manor, Sky City, Golden Westlake, and Golden Palace have also struggled to regain their money from their investors.