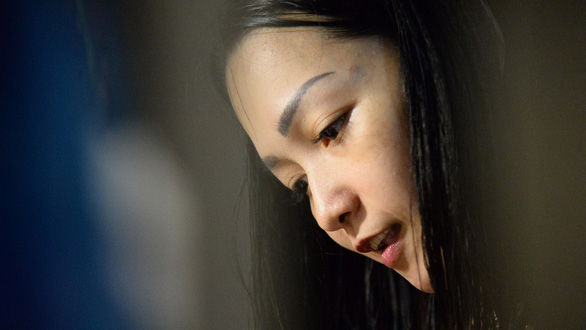 Only one of Tran Tra My’s fingers is strong enough to type on a computer, but that hasn’t stopped her from filling pages with stories of good deeds and big dreams.

A sever childhood illness which severely damaged her limbs hasn’t stopped My from rising through Vietnam’s literary ranks to become an inspiring, household name known sharing motivational stories, spreading her love of live, and making a change in society.

Only one finger left to type

Tra My was born in 1986 in Quang Tri Province, located on Vietnam’s north-central coast.   When she was three months old, an extremely high fever led to seizures and permanent damage to her legs and hands.

Not only are her legs too weak to walk, her hands are unable to hold a pen properly and her speech is hindered by her inability to make her mouth move properly.  Doctors and family suspected that she’d be housebound her life.

Though she never attended school, Tra My was able to learn how to read and write with the help of her younger sister.  She spent much of her childhood immersed in books.

By 14, she had started writing poetry.  Though only one of her fingers is strong enough to type, she persevered at the age of 21 to begin using a computer to writer her stories. It was not until that age that Tra My learned how to speak, though she isn’t fluent due to the disability caused by her illness, according to news page VnExpress.

Tra My admits that her disability has caused her to spend the better part of 20 years drowning in self-consciousness - something you would never expect after meeting the positive, strong-minded, and charismatic person she is today.  Now, she proudly proclaims that nothing can now stop her from living her life to the fullest.

She dresses up to attend events, charity fundraisers, and photoshoots.

She’s also established a charity fund called “Giac mo doi chan thien than” (Dream of an angel’s legs) to raise disabled people’s interest in books and literature, and to help them become ambassadors of goodwill and faith for charitable events.

Not only is she a successful author, she also works with several news agencies to write stories about inspiring individuals as a means to spread positivity and motivation in her community.  Her bibliography, written over the course of ten years, includes Giac mo doi chan thien than, Chung ta chinh la mua xuan (We are the spring), and Yeu tren tung ngon tay (Love on each of the fingers).

This week, she published her fourth book – Tin vao dieu tu te (Believe in the goodwill) after four years of writing.

Tin vao dieu tu te is only 100 pages long but tells of Tra My’s upbringing and inner thoughts throughout the years, particularly her feelings after interviewing inspiring figures in her community.

“I spent four years writing this book.  It consists of articles that are only a thousand words long each, but I felt I needed to spend two full years rewriting them until I was happy,” Tra My shared.

Despite having very weak hands which can barely type on a computer, the author was able to craft over 100 cards by herself for her fans.

She believes that even though many can see that she tries to always act with goodwill, she can do so much more.

When she was asked about her definition of “good deeds”, she quickly shared that “good deeds are shown in small daily acts while we are not being irresponsible with our own lives. They do not input any negative thoughts into others’ minds. They also include speaking up about the negative aspects of a society, instead of remaining silent and thinking it is not our responsibility.”

Not only does she try her best to live a life of good deeds, she also wants to spread her mindset in order to make the world a better place.

The 32-year-old now hopes to use this ideology to change her country.

“Everyone knows Vietnam is a country filled with PhD holders and professors, but when asked about the purpose of studying most students would just plainly say ‘Studying is to guarantee a better job, higher salary, or a promotion’.

“Not many people would say that they dream to do to help Vietnam be less poor.  We are the main reason why Vietnam is falling behind compared to other countries. We lack trust in our country and in other people.”

However, not many believe that she was once a negative person, too self-conscious of her disabilities to step out into the world.  For nearly 20 years she was obsessed with the belief that she was a burden on her family.

Having three other siblings, she was worried their friends would judge them for having a sister unable to care of herself.

Soon she realized self-pity was not an option.  She chose to stand on her weak feet, even though they needed support,

“It does not matter if you are walking with two or six legs, what matters is whether you are brave enough to walk on them towards your dream,” Tra My said.

Despite not being able to take care of herself, she decided to leave her family and move to Ho Chi Minh City, a place she always dreamt of, to make a living and live her own life.

“For almost 20 years I didn’t even know how to fold my clothes.

“One day I realized that no one can live for me. No one can live out my dreams and passions.  I couldn’t just sit around and wait for someone to take me to Ho Chi Minh City, where I wanted to live.”

“I couldn’t just wait for people to travel and then tell me their adventures, just like I cannot wait for a miracle to turn me into a healthy person to do what I’ve always wanted to do,” Tra My shared, describing the dramatic change in her attitude over the past 10 years.

Having overcome the first challenges of settling down including moving, finding apartment, and moments of wanting to let go, she started facing another challenge, a challenge within herself.

She wondered whether she should just mimic other people’s best-selling novels so as to guarantee higher sales.

“At the end of the day, I also need money to cover for my necessities, especially as an independent disabled person.

“I was struggling for a long time between making a living for myself or spreading messages of goodwill to my readers.”

Even her news articles do not provide her with a high income.

Usually stories on online news pages are paid based on views, but few are interested in Tra My’s true stories of disabled people who have overcome their misfortune.

They are spending the summer inside