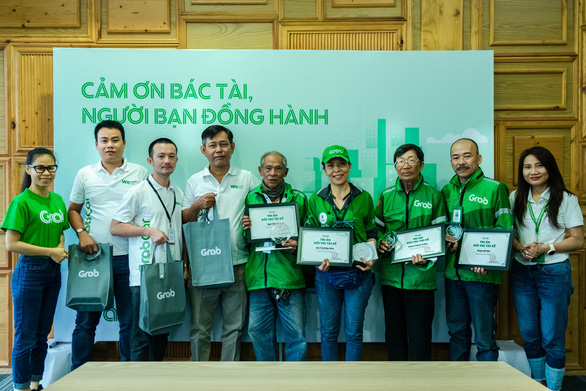 Though many of Ho Chi Minh City’s Grab drivers work tirelessly to make ends meet, these hardworking drivers refuse to shrug off calls for help from fellows and other citizens in need.

“I will never quit Grab because it gives me opportunities to help the community. I will do it until I can’t,” said Ngo Van Ut, a 72-year-old driver for Grab.

Ut is one of the few drivers who have been with Grab since it launched in the Vietnamese market in 2014. At the age of 72, he remains an active member of the Grab driver community, devoting work in initiatives to help other drivers in need.

Though far past the age of retirement, Ut works with the energy and excitement of someone half his age, a trait he believes he gained when he left his 25-year long career as an independent xe om – a conventional motorbike taxi driver – behind.

“The nature of independent work translates to fierce competition for customers. There were often disputes and confrontations. Only the strong survived,” Ut shared.

Ut’s cynical outlook on xe om driving changed when he left independent driving behind and joined Grab in 2014, providing him with a steadier stream of customers, less competition, and less stress.

Since joining Grab, Ut has carried thousands of passengers – some friendly and courteous, others rude and aggressive. Still, no matter who sat on the back of his bike, Ut maintained his professional and positive demeanor.

One important factor in Ut’s love for Grab is the company’s support for its partners.

On the app, Ut and other drivers are assessed on a five-star scale based on customer reviews, yet those partners who receive negative reviews are not fired, but instead reminded of ways they can improve their performance.

This positive attitude takes a significant amount of stress off drivers and creates positivity amongst Grab’s ranks.

Ut is also highly appreciative of the emergency support units Grab has created to help its driver community. Ut is a member of one of these units – the Grab Mobile Response Unit – which assist Grab drivers in road emergencies, responding to traffic accidents involving Grab vehicles or even defending their fellows in conflicts with xe om drivers.

“I hit the road each time I receive a call from a fellow [Grab] driver with broken-down vehicle. It’s important to help them because I know how miserable I’d feel if there was no one around to help me. There are times when I skip my lunch break to help others, but I quickly forget about my hunger and instead focus on the joy of helping others,” he said.

Pham Hung Cuong, a GrabCar driver from Go Vap District, Ho Chi Minh City, is well known in the local driver community for being a proud 'do-gooder' who has spent millions of his own Vietnamese dong to help other drivers in need.

Cuong has been a GrabCar driver for over five years, spending a great deal of his time and money helping his fellow drivers.

One example of Cuong’s dedication to helping others occurred when a fellow driver contacted him in the middle of the night because his car battery had died in Long Thanh District, Dong Nai Province.  Without hesitation, Cuong sprang out of bed, grabbed a pair of jumper cables, and drove out to Dong Nai to help the stranded driver start his car.

In fact, Cuong helps others so often that it has caused his wife to scold him on the several occasions he forgot to pick their children up from school. Still, his wife sympathizes with his generosity and encourages him to continue his work.

Cuong’s work helping others has put him into all sorts of odd situations.

On a recent journey, for example, he was driving a woman to the maternity unit at Phu Nhuan General Hospital in the eponymous district in Ho Chi Minh City when her waters broke, causing nearly VND2 million ($87) in damage to his upholstery. Despite the massive cleaning bill, Cuong refused to accept any money from the mother.

“There’s no reason to focus on money while helping others. I don’t know if it’s destiny, but perhaps that’s the reason why I have driven pregnant woman who broke waters to hospital a few times now. Maybe I’ll Iearn how to deliver a baby soon!” Cuong joked.

While driving expectant mothers is often a joyous trip, Cuong has had his fair share of heartbreaking experiences while behind the wheel. On one such experience, Cuong journeyed out to District 2 at midnight to help a GrabBike driver who had been in an accident.

“It was raining heavily that day. When I arrived, I found him lying unconscious on the ground. A small group of us were able to get him to the hospital, but he did not make it. Every trade has its own kind of suffering, I guess,” Cuong reflected.

Taking about his motivation for charitable work, Cuong shared the story of a severe accident that happened a few years ago during his family’s road trip to the Mekong Delta, where truckers were able to rush him to the hospital after he had been involved in the crash.

After recovering, Cuong asked to remunerate the drivers, but they all turned him down, saying it was simply “part of drivers' brotherhood to help one another out.”

“From that point, I vowed to pay it forward to those who are struggling more than me. It comes from the heart, so no money is required,” Cuong explained.

Cuong and Ut were each named among Grab’s long-time drivers who were honored at a ceremony in December for their partnership with the company.