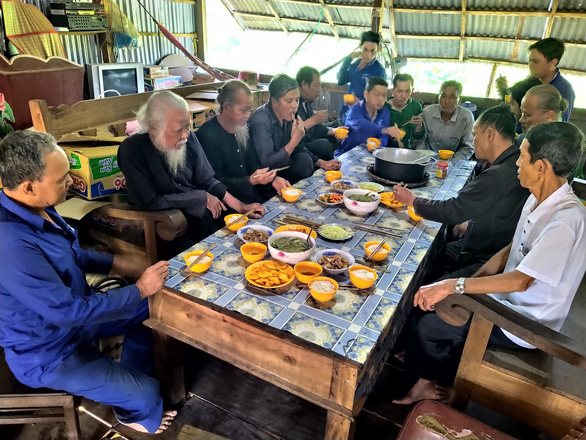 Charity begins at new homes: the Vietnamese carpenters that built hundreds of houses for free

Hundreds of new houses for low income families in An Giang Province have been built over the past several years by a group of carpenters doing their best to support their community.

The group is led by Tran Van Hien, 81, also known as Tu Hien, a native of the region who is widely known across the province thanks to his charitable deeds.

Philanthropy on the frontier

The latest project being undertaken by Tu Hien’s team is a new office for the border guards stationed at the Phu Huu Border Post. The building is the fourth phase in the team’s project to rebuild five control posts for local security forces.

The carpenters in Tu Hien’s group are laser focused on the job in front of them. Communication is minimal – after all, talking doesn’t build buildings. At the forefront of the project is Tu Hien, who directs the group with vigor rarely seen of men in their 80s.

“The living condition at the border post looks terrible. They are under a tremendous burden from the pandemic, yet their barracks barely look like they’ll survive a harsh storm,” Hien explained.

Hien’s charitable acts have even caught the attention of the Cambodian guards stationed just opposite the Vietnamese post.

“I used to travel to the other side of the border to help build houses for poor Cambodian households, so they know us well. There are times when [the border guards] over there even donate wood logs to us so we can make houses for more people in need,” he said.

Each year, Tu Hien and his team build dozens of houses for the poor, but their charitable work doesn’t stop at homes. In the past they’ve built bridges for villages that lack connections to the outside world and even taken on burial work for families that couldn’t afford a proper funeral.

Intact leaves cover the tattered ones

Though Tu Hien is known for his philanthropy, he himself has often been in tight squeezes for money, with barely enough cash to put food on the table for his children.

One of Tu Hien’s most memorable philanthropic moments happened several years ago when he met a widow in Phu Thanh commune with no place to stay but the basement of a neighbor’s house. Tu Hien and his team stepped in to build the woman a place to stay using wood that Tu Hien had purchased to fix up his own dilapidated house before the rainy season.

Feeling like a new house wasn’t enough for the woman, Tu Hien also scavenged more wood and built the woman an altar for the woman’s deceased husband. He also purchased furniture, kitchenware, food, and spices for the woman and her family using money from his own pocket.

The widow was just one of out of many individuals whose life has been changed by Tu Hien’s good deeds.

Over the years, the carpenter has kept a secret notebook detailing the plights of those he’s countered and planned to help every single one of them.

Of course, Tu Hien would not have been able to help so many people on his own and he’s thankful for the contributions from his network of volunteers and for donations given to his cause by dozens of other benefactors.

In 2008, Hien received a surprise donation from three brothers – a plot of land for him to build his own carpentry workshop.

Using the gifted land as his headquarters, Tu Hien and his partners are able to help more people in need.

Each of the volunteers on Hien’s squad have their own specialties, such as building houses, constructing bridges, and even making caskets. This mish mash of talents helps them cover all the needs of the region’s poor.

The teams operate on a volunteer basis, but each member still strives to contribute massive amounts of effort, with about twenty volunteers showing up to tackle most projects.

Hien also saw people who joined his volunteer lineup after gaining a foothold and moving upwards in life thanks to the house he’s built for them. Others in his rotation of volunteers are simply striving to give back to the community.

Nguyen Van Hon, who turned 91 this year, has been showing up to help Hien for many years despite his own impoverished conditions.

“I’m old but fairly healthy myself, so showing up here every day is no big deal,” Hon said.

Nhan, a volunteer driver who transports wood for Hien’s workshop, is another unlikely member of Tu Hien’s team.

Last year, Nhan was in a road accident that broke his leg. His mobility has been significantly restricted ever since, yet he still manages to show up for the team as if nothing had ever happened. He also found a lover with whom he recently tied the knot.

“I promised my wife that I would prioritize my family’s financial stability before dedicating all my time to the workshop to help those who are less privileged than me,” Nhan said.