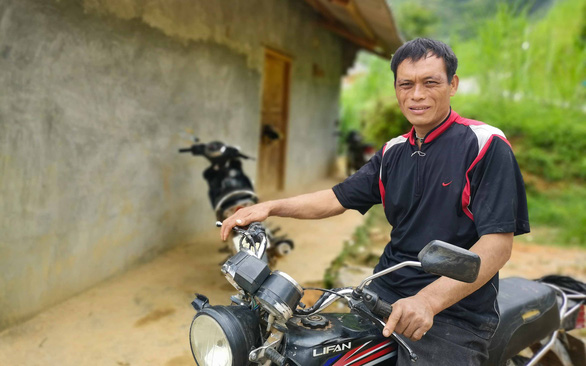 From China to Pakistan: Vietnamese man travels 7,300km on foot to flee slavery

In 2012, a man of Hmong ethnic origin from northern Vietnam went missing after being lured to China in search of a better job.

Two years later, after walking over 7,000 kilometers, he managed to return home in one piece, bringing back stories of his incredible escape from slavery.

Now that he has a home to his name and a family to take care of in Lung Lau Village of the northern Vietnamese province of Ha Giang, Vu Gia Po feels safe recalling the hellish time he spent in China and his death-defying escape.

As Po tells it, the person who set the ordeal in motion ten years ago was none other than his stepfather Vu Chu Mua, who convinced him to take a high-paying job north of the border, offered by a broker named Vu Xi Gia.

Shortly after Po agreed to go, Gia grouped him up with some other job hopefuls and sent them on a clandestine trip to China.

Upon handing over the group to the Chinese middlemen, Gia received his commission and left, while Po and his fellow villagers were sent to a dormitory building housing hundreds of workers in Guangdong Province.

Po could barely talk to anyone there, as the workers came from various areas, each speaking a different language.

His boss there was a Chinese man, who sought to regulate his inferiors with barbaric penalties.

“I got whipped if I didn’t do land plowing work hard enough, or even if I took a break at midday,” Po recounted.

“Once he kicked me right in my chest when I was eating. I’m terrified of his boots,” he said as he pointed to a scar in the middle of his torso.

The brutal man forced Po and the workers to wake up in the early morning to do all kinds of hard labor based on local demand, be it tree planting, stevedoring, or farming.

But their food rations were dangerously low in protein, which led several people in the dorm to become fatigued and later disappear from the site.

Seeing his fate dangling by a thread, Po resolved to make it out of the hellhole.

One day, when the group of workers was shepherded to a worksite at midnight, Po took his chance to flee into the woods as the tyrannical boss was busy beating other workers.

Fearful of being caught on major roads, Po pushed forward through the dirt tracks, wandering aimlessly unable to ask for help from anyone.

Surviving for 18 months by panhandling for food, he went through China’s Yunnan Province, then Myanmar, India’s northeast state Manipur, and Bangladesh, before traveling trans-India to reach Pakistan, where he came under suspicion of being a spy and was arrested by local authorities.

There, he spent three months in jail before the Vietnamese Embassy and several non-profits helped get him released and repatriated.

By that time, he had trekked an estimated 7,300 kilometers without any vehicles, money, or even food.

On May 12, 2014, Po was reunited with his family in Ha Giang after two years going missing.

“After he left, I did not hear anything about him for quite a while,” Ly Thi Lia, Po’s wife, recalled.

“I cried my eyes out when I saw him again.”

After selling Po off a few years ago, Gia went on to scam his wife, saying her husband was caught after trying to flee and needed VND30 million (US$1,318) to bail himself out.

Having no other choice, Lia had to sell a patch of land, her livestock, as well as using all her savings, to pay the shady smuggler.

“I still had to provide for three children studying at the time, but my only patch of farming land was gone,” Lia remembered the past struggles as tears rushed to her eyes.

Meanwhile, there was no news of her husband until the day the information of his survival came to her through local police officers.

Overwhelmed with joy, she drained her pockets again to follow the officers to Thailand, where she was finally reunited with him after two years apart.

When they returned home, the couple received a total of VND70 million ($3,000) from a reporter who covered their story, as well as benefactors who heard about them through the media, which helped them invest in livestock and make a living.

In the meantime, Gia and Mua were indicted, each receiving six years of imprisonment on charges of human smuggling.

Speaking of the future, Po said he still yearns to travel the world, just not in the same way he did to survive.