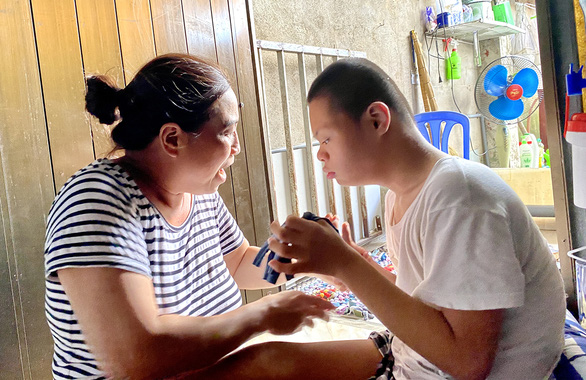 A Vietnamese mother in Ho Chi Minh City has spent the last 12 years taking care of her child, born with Down syndrome, who is unable to talk, walk or take care of himself. They receive community support and currently live in a cemetery.

As the evening draws near, Vu Thi Thanh Nga, a resident in Ward 16, Go Vap District, pushes her son in a wheelchair to the porch for a breath of fresh air.

The 12-year-old child expresses his joy to be outside after being stuck indoors for a few rainy days.

Nguyen Hoang Gia Anh, the son, did not answer; he has not spoken a single word since he was born.

Life in the cemetery

Anh was born with Down syndrome.

During her pregnancy, Nga did not notice any deformities in the fetus even though she had regular ultrasound check-ups.

He was born with serious physical defects and would spend his life unable to carry out basic tasks including talking, eating, and keeping himself clean.

Nga came to terms with the situation and was determined to never part with her son despite the challenges to come.

Down syndrome is not a family disorder. It is caused by the presence of an extra chromosome, but it is not an inherited genetic disorder.

Nga herself was over 40 years old when she delivered her baby.

She thought to herself: “I will take whatever fruit the good heavens give me. My child is my own flesh and blood, so I will try my best to fill him with love. “How can I abandon him?"

Nga and her siblings parted ways following their parents’ funerals.

Without her parents’ place to live at the time of childbirth, Nga and her son had to rent a room and she did manual labor work for a living.

Due to the tight family financial ability, his father had to work in Binh Duong Province, just outside Ho Chi Minh City.

The father and son could get together only once every few months.

The poor living conditions at the low-quality accommodation added to the child’s sickness.

Nga took Anh to the Bac Hop Cemetery eight years ago, hoping to be admitted into one of the charity homes over there.

The place is actually one 10-square-meter room.

The restroom and kitchen areas were newly built and are located outside of the living area.

Their room is at the end of the cemetery, next to an old lady’s.

The mother and son only have to cover monthly water and electricity bills.

Due to her ailing health, Nga stopped working at construction sites three years ago and has worked as a delivery woman for a beverage store.

She has some products for sale at home too.

Her daily work routine starts from 4:00 am and ends at noon.

She has the janitor at the cemetery, Hoang Manh Duc, take care of her son in the early hours of the morning.

When Anh wakes, the janitor notifies Nga by phone so that she can head back and help him with his breakfast.

Some days the mother has to call off two to three times because Anh pees in his pants or has a tantrum.

Her employer, fortunately, is sympathetic with her situation and allows her flexibility in her working hours.

Duc has been keeping watch over the cemetery for over 10 years, so he is well aware of the tough life Nga and her son have.

He spends his morning cleaning the tombs while keeping an eye on the boy, who sleeps behind barred doors.

“I check on him every 15-20 minsutes to see if he has woken up and whether he has peed on the floor,” said Duc.

“Nga has to go to work to make ends meet. To me, Anh is like a grandson.”

A mother’s love for her child

Nga does not feel confident leaving her child at home even for half a work day.

“He will burst out demanding to see me. He can have fun on his own, but that gives me butterflies in my stomach,” she said.

The mother simply sheds silent tears watching her son unable to monitor his own needs, making a mess everywhere around the house.

Struck with Down syndrome, 12-year-old Anh has the capabilities of a one-year-old.

He is entirely dependent on his mother. Nga has to feed him slowly and offers him a breastfeeding bottle.

He cannot drink from a cup as he is unable to handle one. He tries to signal his need for a toilet break every time.

Five years ago, Anh used to bang his head on the wall and the floor during his tantrums.

The mother used her own body as the shield to lessen the pain caused from such behavior.

Such a habit faded after three years and is completely gone by now.

While his peers are already in secondary school, Anh spends his days around the tiny room inside a graveyard.

Nga tried contacting schools for the disabled, but she received constant rejections when the teachers learned that her son could not feed himself food and water, nor use the restroom by himself.

The weary mother was left in tears.

Anh toddles like a two-year-old learning to walk. After a few steps, he has to sit down and rest.

“Sometimes it hurts to see other children hopping around, laughing, and having fun, while my son can barely utter a word,” she said.

The old mother spent nights watching her child sleep and tears formed around her eyes.

She had nobody to confide in except her own child. It felt like talking to herself because he could not comprehend what she had to convey.

When she could not bear it anymore, the woman visited her parents’ tombs, prayed to them, and let out all of her steam.

Sometimes she takes him on a motorbike to the gatherings of the club for disabled people in the nearby Catholic parochial residence.

The bike was modified to have a front seat for her son to sit with a better view of the streets.

At the end of the day, she takes him on a ride – which is a good way for him to ease his mind.

They have a gift wheelchair as well. The mother pushes her son around the cemetery all the way to a nearby alley.

The child is extremely happy every time.

It takes a lot of effort simply to raise a normal child, let alone someone special like Anh.

Nga takes delight in her son’s hugs and kisses as a reward.

Sometimes he hits her to show disapproval because he cannot communicate. This hurts the mother more spiritually than physically.

“He doesn’t cry to get my attention. I ask him to be nice when I am off to work. I promise to get him some rice and some porridge. He is just happy to hear that,” she said.

“When I have to do other things, I also ask him to be good. I will promise him some smoothie. Sometimes he grabs my legs, showing that he doesn’t want me to go.

“So I will just set my job aside and stay home with him."

Her monthly income includes her salary and sponsorship from the cemetery and the local people.

Sometimes they get gifts and money from philanthropists.

According to Nguyen Duc Long, manager of the Bac Hop Cemetery, Nga and her son are much loved by the local people.

“We recently built a toilet outside to increase the total space. We have redone the cover to prevent rainwater from splashing in.”

Anh also receives a monthly stipend of VND960,000 ($50) from the local fund for disabled children.

Such support from the community keeps the mother’s heart warm amid the darkness of life.

Anh hid behind his mother’s back when Tuoi Tre (Youth) newspaper correspondents arrived at their home.

Nga is afraid that she may become too old and unfit for work in a few years.

“I will try my best for all the days I have left,” she said.

The love for her son is the force that uplifts his mother.

“Heavens never make it too hard for anyone. He may not be so lucky, but we are cared for by the people around us,” she added.

“That is the blessing from our previous lives. So many other people have a tougher life than us.”

Nga simply hopes that Anh will always be healthy and will understand what she says someday.

Her biggest dream is to hear him call out ‘mommy,' but she understands how challenging that is.