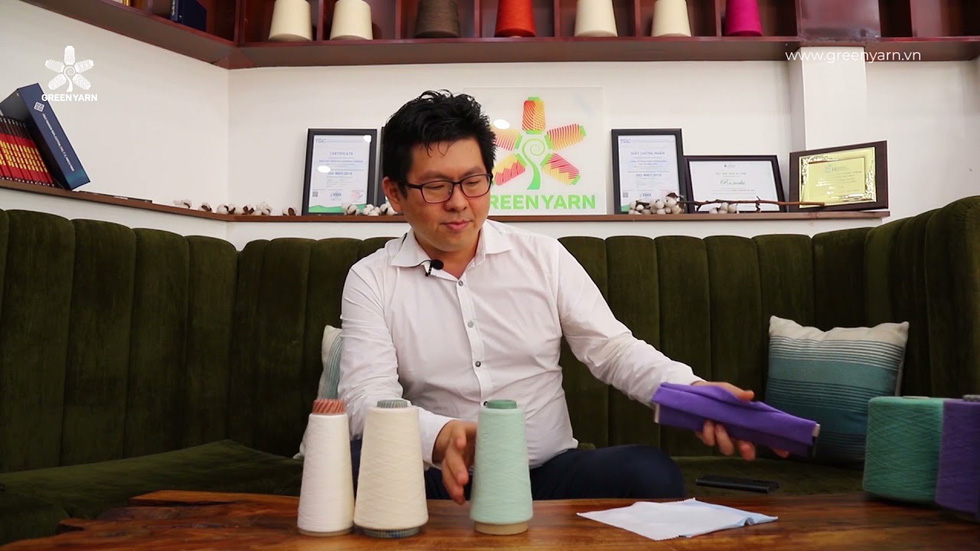 Many young enthusiasts are engrossed in farming, industry, and tourism among other fields for a greener Vietnam.

When he was 16, Quach Kien Lan left Vietnam for New Zealand to study economics at Massey University.

The 39-year-old believed he chose a long life in the kiwi fruit country, one of the world’s most peaceful nations.

However, 10 years after he earned his bachelor’s degree and tried multiple different jobs abroad from a marketing employee, seller, and chef to a bartender, he finally decided to return to Vietnam to produce natural fabric.

It seemed unbelievable, but the overseas Vietnamese student always nurtured a desire to green Vietnam’s textile and garment industry, which is one of the country’s spearhead sectors, but has caused many scandals over negative impacts on the environment.

Lan is teaming up with Dr. Pham Thi Hong Phuong, head of the faculty of medical engineering at the Industrial University of Ho Chi Minh City, and some partners to implement an initiative to produce fabric from banana fiber.

Over the past year, the team has created various machines to extract banana fiber from the trunk of the plant, producing ropes in standard sizes and lengths.

As banana fiber turns stiff when being wetted, making it hard to be woven into fabric, the team uses silk to increase cellulose in the banana fiber.

“We have completed one of the toughest steps. This is producing perfect banana fiber," said Dr. Phuong.

“The next step is to create ropes and weave them into fabric.

"For a practical method, we will combine these ropes with some other special natural fibers.

“We aim to consume banana fiber in banana-growing areas in An Giang, Kien Giang, Tien Giang, and Long An in the Mekong Delta region of Vietnam to produce fabric in bulk.

“In Vietnam, banana waste has yet to be utilized well."

Vietnam’s advantage of cheap labor for the apparel sector is weakening, while the government is about to issue restrictions on the industry due to its negative impacts on the environment, said Lan.

Therefore, to compete with other nations’ products, Vietnam should create various value-added items that are eco-friendly, he advised.

For instance, he has debuted BambooBiocell fabric woven from cellulose-rich bamboo fiber, and launched two factories in Long An Province and Thua Thien-Hue Province to churn out this fabric, which makes T-shirts and shirts.

“In the past, my family did business in the textile dyeing industry in Saigon, but I never thought that I would pursue a career associated with fabric," he said.

"It was a karmic connection that urged me to return to Vietnam from New Zealand to green the dyeing industry.

“When starting my plan, I faced several challenges and failures.

“The fabric woven from bamboo fiber helps save up to 50 percent of water for dyeing and slashes gas emissions by 50 percent.

"The product creates a sustainable value for the industry."

He plans to launch fabric made of the fiber in December this year, while his company is set to debut a new type of fabric from a new natural fiber in Vietnam every two or three years.

He is also initiating a project to combine traditional silk in An Giang Province’s Tan Chau Town with bamboo fiber to turn out a new modern product.

“I think that if a culture fails to catch up with the present era, it will turn into the past," Lan said.

“To follow the global trend, the culture should not only keep its distinctions intact but also promote integration.

“The Central Highlands region is home to a kind of century-old cotton that is being conserved by young people there.

“Our next project is producing new items made of the cotton and planting a field of this unique cotton."

After traveling tens of kilometers to reach the Dong Nai Nature and Culture Reserve, Vo Quang Trung and a group of young people in Binh Thuan Province released 10 cobras into the wild at the Ma Da forest, as an attempt to protect the wildlife.

These young people have a deep love for nature, so they join many online wild animal sale groups to find out who are illegally selling rare and strange species of animal and buy them.

They will contact Trung to help them release those animals whose habitat is the Dong Nai Nature and Culture Reserve.

“After releasing wild animals, these young people asked me to take them around the forest to explore the life of reptiles and amphibians.

“Sometimes, we were so bewitched by these species that we did not leave the forest until 3:00 am."

During each of his trips into the wild, Trung records all the moments of animals and plants and takes thousands of photos of these species.

He is carrying out multiple large-scale wildlife protection projects, including one to establish an ASEAN reserve at the Ma Da forest and a Ramsar site near Tri An Lake.

Also, Trung devotes himself to making a source of rare genes beneficial to locals.

Many rare medical plants in the southeast region of Vietnam such as goniothalamus donnaiensis and eurycoma longifolia jack have been bred successfully.

Trung has been cooperating with some manufacturers to use the output of these plants.

As a case in point, passiflora incarnata, which is mainly found in the reserve, has been grown widely to produce tea bags for the local market.

The 40-year-old man found his life meaningful while conducting an on-site survey to a forest in the central region for his scientific research at university.

“I was surprised that the trip totally changed me. When I was young, I often killed insects and birds. However, now I see supporting and taking care of animals as my mission and karma,” Trung said.

Locals once discovered a rare wreathed hornbill that had fallen into a house because it was hurt. Because the species is especially rare and there is not much information about them, Trung spent time gathering information and asking for help from many animal experts in Vietnam to find ways to cure the bird.

It took him three months to take care of the hornbill until it completely recovered.

It is Trung who helps locals feel responsibility and enthusiasm for wildlife protection, a resident said.

“Once I rode over 40 kilometers to a resident’s house to bring a lost young squirrel back to the forest. We must be responsible for all animals,” Trung said.

As a guide of birdwatchers

Serving as a tour guide of birdwatchers is a useful way for the young man to level up the value and the beauty of nature in the Central Highlands region.

Notably, the Lam Vien Plateau in the Central Highlands province of Lam Dong, some 1,500 meters above sea level, is home to dozens of rare birds.

Nguyen Anh The, 38, works as a tour guide who does love birds. Over the past five years, he has arranged countless birdwatching tours for tourists, mainly foreign visitors.

Thanks to its altitude, the Lam Vien Plateau is considered as an oasis on land of rare and strange birds in Vietnam.

“I was surprised at their excitement about birds. These tourists from the United States and Europe entered Vietnam to explore the country’s nature. Many said that they preferred watching birds and enjoying the ecosystem in Vietnam to traveling to beautiful beaches and big cities,” The said.

Apart from the birdwatching tours in the Lam Vien Plateau, The also takes tourists to Can Gio District in Ho Chi Minh City, which has mangrove forests as the characteristic of the city’s outlying district, to see birds, including black-winged stilt, purple heron, chickadee, and yellow-vented bulbul.

Regarded as a 'station' of birds in Vietnam, Can Gio has many migratory rare birds.

Since late September, the number of black-tailed gulls and Caspi terns has increased.

At the peak of bird migration, the woods and salt fields in the district are crowded with thousands of these birds.

Due to his love for nature, The quit his job as a construction worker to study and started a new job as a tour guide.

He traveled to numerous mountainous areas in Vietnam to take photos of exotic and rare birds.

The uploads all documents and information about birds to the website called Vietnambirds.

“Travelers to the jungle should use all five senses to feel and enjoy the beauty of nature in Vietnam,” said The.

He is also launching tours to natural attractions such as Cat Tien National Park in Dong Nai, Da Lat City, and Can Gio for children.

The tours are aimed at making children feel the beauty of nature and raising their awareness of environmental protection and respect for nature.

“To me, that is enough as I do not care about profits from these tours,” he said.