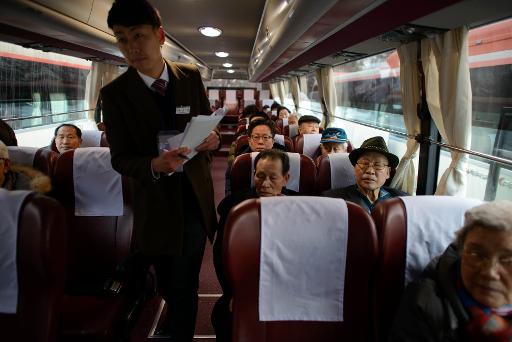 Sokcho (South Korea) — Several hundred elderly South and North Korean relatives clung to each-other, rocking and weeping, as they met for the first time in 60 years Thursday at a reunion for families divided by the Korean War.

The emotional gathering at North Korea's Mount Kumgang resort was the result of tortuous, high-level negotiations between Pyongyang and Seoul, which had nearly broken down over the North's objections to overlapping South Korea-US military drills.

Television footage showed snow falling hard as 82 South Koreans -- some so frail they had to be stretchered indoors -- arrived at the resort in a convoy of buses to meet 180 North Korean relatives they have not seen for decades.

Inside the main hall, where numbered tables had been laid out, there were moving scenes as divided brothers, sisters, uncles, aunts, step-siblings and in-laws sought each other out and then collapsed into each others' arms.

Choi Byung-Kwan, 67, whose father was taken to the North during the 1950-53 conflict where he remarried and had seven children, broke down as he hugged his step-brother and step-sister.

"At least he had a family up here so he must have felt less lonely," Choi said of his father. "How lonely would he have been if he didn't have a family of his own in the North?"

Nearly everyone had brought photographs, either tattered, black and white images of the family before it was split up, or brand new colour snaps of their current families.

These were then passed around, stroked and cried over.

The North Korean women wore traditional hanbok dresses, while the men were mostly dressed in dark suits. All seemed to be sporting badges of former leaders Kim Il-Sung and Kim Jong-Il -- obligatory accessories in North Korea.

A grand dinner was planned for the evening and on Friday the reunited relatives were to be given the chance for more private gatherings in their guest rooms.

According to officials in Seoul, the North Korean group included two South Korean fishermen who had been kidnapped by the North in the 1970s.

The South Koreans, with an average age of 84, had left the eastern port city of Sokcho at 8:30am on board 10 buses, with half a dozen police vehicles as escorts.

The departure was delayed as two woman needed medical attention, and ended up being taken in ambulances for the entire journey.

More than a dozen were in wheelchairs and needed help getting on and off the buses, which they shared with 58 family members, brought along for physical as well as emotional support.

All carried bags stuffed with gifts, ranging from basic medicines to framed family photos and packets of instant noodles.

"The gifts I'm bringing to my sister should be good. Something you can't see much in North Korea so I hope she will be happy," said Kim Se-Rin, 85.

"I've also included some US dollars for her and my younger brother," Kim said.

Millions of Koreans were separated by the 1950-53 war, and the vast majority have since died without having any communication at all with surviving relatives.

The reunion programme began in earnest after a historic North-South summit in 2000, but the waiting list has always been far larger than the numbers that could be accommodated.

For many people, time simply ran out. Last year alone 3,800 South Korean applicants for reunions died without ever seeing their relatives.

For all the joy the reunion brings, it is tempered by the realisation that -- given the participants' advanced ages -- it also marks a final farewell.

"This will be our first and last reunion," Kim Dong-Bin, 81, said of the elder sister he left decades ago in Pyongyang.

All the South Koreans had spent Wednesday night in a Sokcho hotel, where they were given an "orientation" course by South Korean officials listing a series of dos and don'ts for their stay in Mount Kumgang.

"They were basically telling people not to discuss any political issues and not to be swayed by North Korean propaganda," said Kim's wife, Shin Myung-Soon.

Before boarding the buses to cross the heavily-militarised border, they spoke of their hopes and anxieties ahead of the meetings they had dreamed of for so long.

"I think when I see her face, I won't believe it's real," Kim said of his sister.

"I wonder if I will be able to recognise her immediately? It's been so long," he added.

It was the first meeting of divided families since the reunion programme was suspended following the North's shelling of a South Korean border island in 2010.