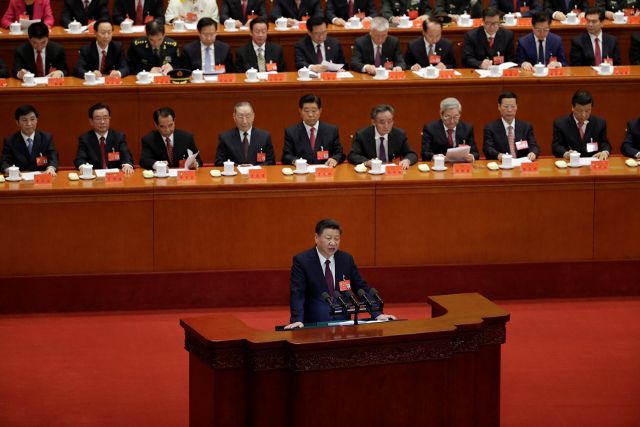 BEIJING, Oct 18 - Chinese President Xi Jinping opened a critical Communist Party Congress on Wednesday with a pledge to build a "modern socialist country" that will never copy the political systems of others and will remain open to the world.

Xi's wide-ranging speech kicked off the twice-a-decade congress, a week-long, mostly closed-door conclave that will culminate with the selection of a new Politburo Standing Committee that will rule China's 1.4 billion people for the next five years.

He set out his vision as he addressed more than 2,000 delegates in Beijing's cavernous Great Hall of the People, including 91-year-old former president Jiang Zemin.

"Through a long period of hard work, socialism with Chinese characteristics has entered a new era, this is a new historical direction in our country's development," Xi said in a speech carried live across the nation on state television.

China will relax market access for foreign investment and expand access to its services sector, as well as deepen market-oriented reform of its exchange rate and financial system, while at the same time strengthening state firms, he said.

China's political system is the broadest, most genuine, and most effective way to safeguard the fundamental interests of the people, Xi said.

"We should not just mechanically copy the political systems of other countries," he said.

"The fight against corruption has formed an overwhelming posture and strengthened in development," he said.

Xi has waged a relentless fight against deep-rooted graft since assuming power five years ago, with more than a million officials punished and dozens of former senior officials jailed.

He also said China had firmly opposed and prevented independence for self-ruled Taiwan, claimed by Beijing as its own, over the past five years.

While the speech was high on aspiration and short on policy specifics, its language will be parsed for signals or policy directives, including on the direction of reforms for the world's second-largest economy.

Xi has consolidated power swiftly since assuming the party leadership in 2012, locking up political rivals for corruption, restructuring the military and asserting China's rising might on the world stage.