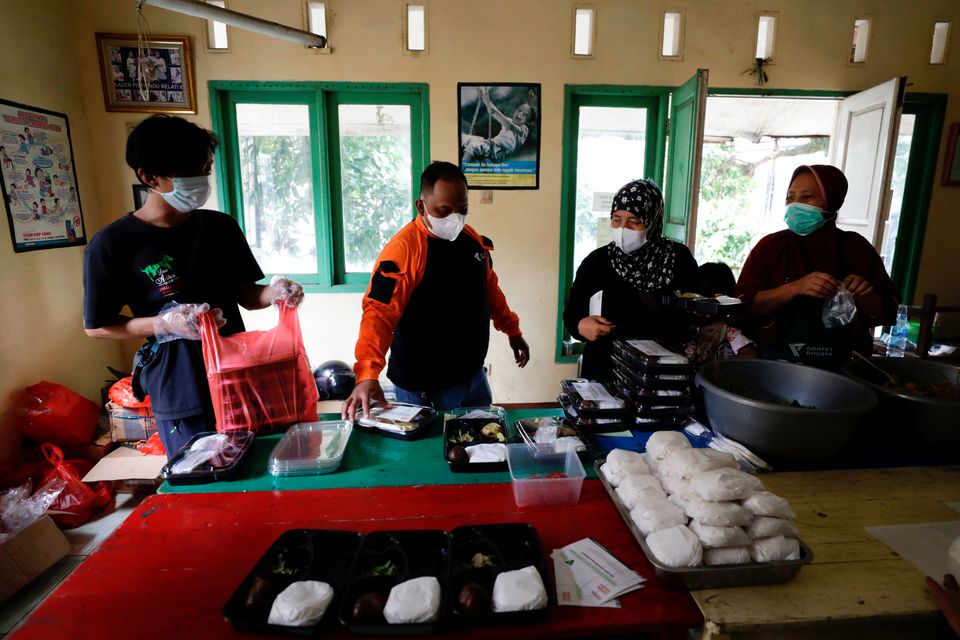 JAKARTA -- As coronavirus surges in the Indonesian capital, volunteers like Badie Uzzaman are pitching in to help, delivering food to people who have tested positive but are forced to quarantine at home as hospitals run short of beds.

The 26-year-old driver of a three-wheeler, Badie drops off the packages in front of patients' homes, calling out that their food has arrived and making small talk from a distance.

"I do feel scared," said Badie, one of four volunteers who deliver meals to up to 70 homes three times a day. "I'm worried all the time as I have family and go home to them after work."

In recent days, new infections, driven by the more virulent Delta variant, have been higher in the world's fourth-most populous nation than elsewhere, a seven-day average from a Reuters tracker showed.

Badie works for non-profit charity Dompet Dhuafa, or "Wallet for the Poor", which set up the kitchen, and aims to open two more, after some housewives joined in the task of cooking rice, chicken and vegetables.

"Many hospitals are full," said coordinator Ahmad Yamin. "We decided to create this kitchen station to help people ... and give them nutritious food to boost their immune systems so they can recover as soon as possible."

With hospital occupancy rates at about 90%, few COVID-19 sufferers are likely to find a bed, so their only option is to self-isolate, recover at home and prevent the spread of the virus.

Daily infections in the Southeast Asian nation of more than 270 million hit a high near 57,000 last week, while the death toll has doubled from early July to about 1,000 per day.

Badie has overcome fears of getting infected from his work, he said.

"I've fallen in love with humanity after all and that is what makes me believe everything will be fine."