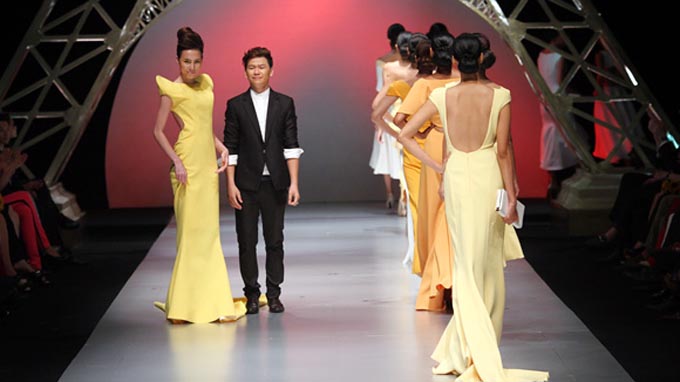 Designer comes back from disappointment to win contest

Like a once-injured animal, Hoang Minh Ha, winner of the 2013 Vietnamese version of “Project Runway”, said he initially joined the contest to regain confidence in his designing skills after a disheartening failure.

Inspired by blue waves and radiant sunlight in Paris, which he and the other two finalists had visited to bring its gorgeous beauty into their competing designs, Ha’s collection produced a persuasive win for “his perfect designing and sewing skills and classic yet striking designs which draw on women’s sensual curves and accentuate their beauty.”

However, Ha, from the Central Highlands province of Dak Lak, didn’t dare to dream of winning first place.

Several years ago, after winning a local fashion contest in 2008, he boldly launched his own trademark in 2011, but his business closed soon after due to his lack of managerial experience.

“Before, I was a perfectionist and so passionate about fashion. Following the failure, I grew apprehensive, pessimistic and doubtful of my abilities. All I needed then was a contest to compete in, improve my weaknesses, and regain my confidence and zeal in my job. I entered the “Project Runway” contest with great caution, just aiming to learn as much as I can from the trainers, jurors and competitors,” Ha confided.

He added that during his first days in the contest, the jurors often commented that his designs were too fanciful, which diverted them from the desired purposes.

“It then hit me that a good designer must know how to reconcile his ego and clients’ tastes. No matter how gifted the designer is, his works won’t be of much use if they don’t satisfy his clients,” the young designer stressed.

Ha went on to impress the “Project Runway” jurors at its June 16 finale as the contestant who was most improved. His winning collection is highly acclaimed for its bold cut-outs and deluxe designs.

Apart from the VND500 million ($25,000) cash prize, Ha will have a chance to showcase his winning collection across eight pages in the celebrated Harper’s Bazaar fashion magazine.

First aired in the US in 2004, “Project Runway” has been produced and broadcast in more than 100 countries, including the UK, Australia, Russia, South Korea, the Philippines and Finland, and attracts millions of views.