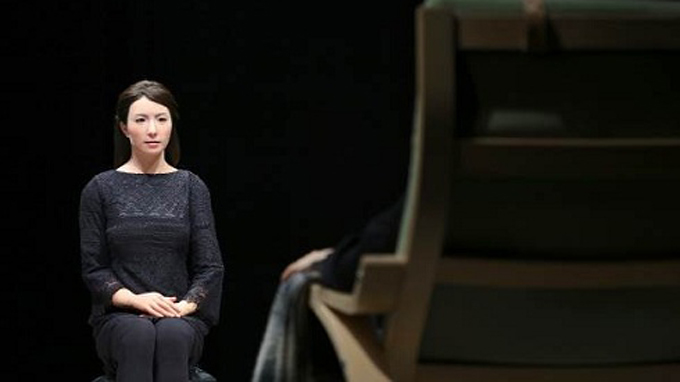 Japanese humanoid robot Geminoid F will perform with its human co-star in a play titled “Sayonara” (Farewell) in Hanoi on Aug 31.

“Sayonara”, set to take place at Cong Nhan Theater, 42 Trang Tien, Hanoi at 10am, 3pm and 8pm on Aug 31, is an innovative 30-minute play, which will star actress Makiko Murata, and Geminoid F, a remotely operated female robot developed by the Intelligent Robotics Laboratory and Japanese robot maker Kokoro in 2010.

The robot, modeled after a real woman, has life-like silicone skin, realistic black hair, and pearly white teeth that produce convincing smiles and is designed to duplicate her human operator’s facial expressions and speech.

The play, which debuted in Japan in 2010 before being staged in several other countries, features a scene in which the robot recites poems in Japanese, French and German to her young, critically-ill female master. However, in its latest version, playwright and director Oriza Hirata added a brief scene following the girl’s death, which is designed to impress the audience on how life and death mean to humans and the humanoid. The play’s highlight is the humanoid’s moving mourning for its deceased master.

After each screening session, Hirata will give a talk on stage projects starring humanoids.

The programs, which commemorate the 2013 Vietnam-Japan Friendship Year, are in both Vietnamese and Japanese and are not for kids who are under 15 years old.