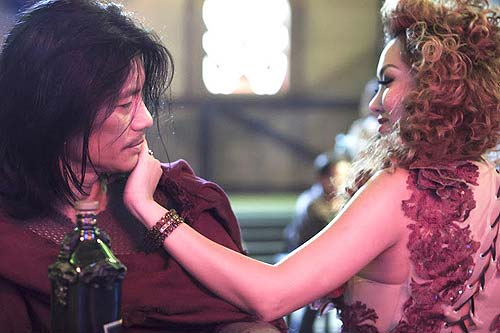 Stringency called for ads for banned goods on film

The National Cinema Department under the Ministry of Culture, Sports and Tourism recently imposed a maximal restriction on the advertisement of banned goods in media products following the public outcry created by the alleged conspicuous brandy ads in the recently debuted film “Lua Phat”.

After its nationwide premiere last month, “Lua Phat” (Once upon a time in Vietnam), directed by Vietnamese-American director Dustin Nguyen and promoted as Vietnam’s first fantasy action movie, received negative responses not only to its low quality given its exorbitant costs, but also for its alleged, repeated brandy advertising.

In one scene, Dao, the protagonist, walks into a tavern and asks the bartender to serve him their best brandy. A green bottle of brandy appears on the screen, slowly enough for viewers to recognize its brand name. The scene goes on for a few more minutes, with Dao talking about the brandy, and a wall of many other bottles of the same brand is shown behind the bar.

However, the culture ministry’s inspectorate decided that no penalty would be imposed on the film. They explained that though the film producer and director did include brandy advertising in their film, it is too brief to be considered violations.

This conclusion sparked strong, widespread public reaction, as the public is baffled by how brief such ads should be to be spared penalty. If this isn’t made clear, other film producers and directors will take advantage of this loophole.

Despite the incident, “Lua Phat”, which was screened at the 2013 Cannes Festival, has been purchased by international film distributors and will be screened in the US, Canada, Australia, New Zealand, Germany, South Korea, India, Pakistan, and Taiwan.

Advertising content for banned goods has recently appeared in numerous local media productions, raising the eyebrows of many viewers, who allege that these works are indeed disguised ads.

In June this year, local pop singer Ho Ngoc Ha’s father-themed music video was blasted as a disguised ad for a brandy brand. One month earlier, the fashion show called “Dem hoi chan dai 7” (The long-legged bash 7) was fined VND35million (US$1,683) for its wine advertisement, unpermitted underwear performance, and other violations.

Before the show took place, its organizer, Venus Co., had been warned by local authorities about the release of its invitation cards, which featured 19 semi-nude male and female models and the logo of a brandy name.

Along with being featured onscreen, the logos of some wine brands have been “naturally advertised” on social networks and newswires by appearing as the background for several local celebrities’ photos when they attended the brands’ parties.