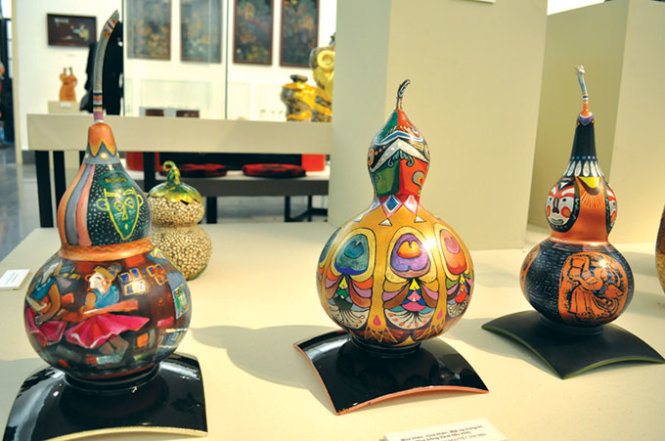 Local experts lament that Vietnamese applied art is running after other countries as it lacks creativity and incentives to spur development.

Seasoned Vietnamese artists and experts have agreed limited creativity is one of the major shortcomings of the local applied art scene.

Applied art is supposed to create new designs for manufacturing and other areas.

Regarding the diversity of product designs, a large number of enterprises admitted 90 percent of the designs in use come from order placers, as local designs are plagued by clichés and a lack of breakthroughs or original traditional culture, she noted.

“Only a handful of local companies such as Minh Long Co. – a producer of high quality ceramic and porcelain ware, and Thien Thanh Co. – a manufacturer of ceramic sanitary ware – have launched their aesthetically pleasing designs, but they still are not on a par with the designs of their French, Italian and Japanese counterparts,” Uyen pointed out.

“The shortcomings make the local applied art sector a worker rather than a creator,” he concluded.

Meanwhile, Nguyen Vu Phuoc, director of Kien Vang Advertising Co. – a local company – said a generation of young, dynamic designers have emerged and been receptive to new trends in the global applied art.

Their problem, however, is being unable to resist the influence of Western art, so they usually fail when asked to create purely Oriental designs, Phuoc pointed out.

Meanwhile, those faithful to purely Oriental features tend to stick to the undesired, complicated designs which are typical of Asian art.

He kept pondering over how the designer was inspired to turn the everyday objects of Vietnam’s street food such as stools, bamboo chopsticks and spoons into such unique designs.

Up until now, local applied artists remain humbled by national flag carrier Vietnam Airlines’ choice of the lotus design created by a Japanese artist as its symbol over 10 years ago.

According to local artists and art researchers, Vietnamese applied art was monotonous during the war and post-war years, with designs restricted to landscapes and cultural icons.

The country’s applied art sector did not begin to grow until the 1990s to tap into the bulging demand for fashion, décor, advertising and interior design.

Many local universities nationwide have established applied art faculties, which have invariably drawn many students.

Local architect and artist Nguyen Tri Phuong Dong expressed his concern that in five years’ time, if Vietnam still lacks associations and forums which operate and provide criticism with innovative ideas, the country’s applied art sector would remain uncompetitive and lag behind that of other countries.

He stressed that training in applied art remains inadequate and lacks updates and creativity.

Though the applied art sector remains uncreative and unfruitful in expert and artist opinions, a good number of century-old traditional crafts villages across the country have adjusted themselves to consumer demand.

According to locals, the Dai Bai bronze casting village in Gia Binh District in northern Vietnam’s Bac Ninh Province was established around 900 years ago.

The local artisans take great pride in their time-honored craft and their unique casting and bending techniques which make them stand out from other villages.

According to Nguyen Xuan Huong, a local cultural official, the majority of the village’s youth have followed their forefathers’ footsteps.

The number of skilled artisans and fledgling apprentices has risen by three or even five times compared to the past.

Young artisans and workers keep updating new applied art designs and techniques from the Internet, apart from treasuring their own classic ones.

Nguyen Xuan Binh, a young worker, said he earns some VND300,000 (US$14.12) per day as he is capable of performing technically demanding techniques, while less experienced people are paid around VND200,000 a day.     They mostly work on orders and cater effectively to the market’s ever-changing tastes and demands.

Similarly, artisans in renowned Bat Trang Ceramic Village, Son Dong Fine Art Wood Carving Village and Nhan Hien Sculpture Village, which are all located in Hanoi, have made tremendous effort to adjust themselves to the fastidious local and export markets by sourcing updated designs from the Internet and elsewhere.

“We still strictly adhere to the techniques passed down from our forefathers hundreds of years ago. However, updates and quality improvements cannot be done without, including how to improve the finishing touch and paint’s texture and durability, and adopting machinery to save human labor,” Nguyen Tri Quang, a seasoned artisan, said.

Quang is one of the artisans who helped revive the fine art wood carving village of Son Dong.

“Client demand is diverse and varies from time to time. There are times when client demand and tastes are affected by exotic cultural elements, but then all come down and return to purely Vietnamese designs,” said young artisan/ business owner Nguyen Van Trung, of the Dai Bai bronze casting village.

According to veteran artisan Nguyen Minh Phu, whose stone sculpture earned a special prize on the occasion of the grand ceremony to commemorate the 1,000th anniversary of Thang Long- Hanoi, Nhan Hien – his craft village – has added stone sculpture to its long-standing wood sculpture since the 1990s to tap into changing local demand.

In August this year, the Ministry of Culture, Sports, and Tourism issued a document warning against the use of exotic mascots, particularly Chinese-style stone lions, in religious institutions and public agencies.

The warning came as a devastating blow to stone carving villages throughout the country, particularly in Da Nang City and Ninh Binh Province, as few customers are willing to buy new Chinese-style mascots, and existing statues are being moved out of pagodas, temples and public agencies.

As most stone mascot carving businesses have ground to a standstill, owners and craftspeople are struggling hard to find a way out.

But Phu, the veteran artisan, said business at his village is not particularly hurt, as artisans here mostly work on clients’ orders, though their works now feature more Vietnamese landscapes and scenes from historical tales.

“There’s no need for such a clear, rigid distinction between this country’s culture and that of others, as art is a convergence. Mascots and characters created in one country can easily cross borders and be embraced and adopted in others,” said Ha Van Lam, an official of Bat Trang Ceramic Village.