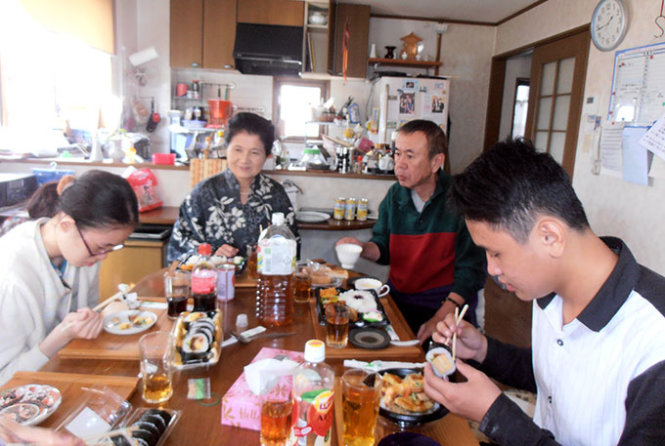 A Vietnamese music lecturer shares with Tuoi Tre (Youth) newspaper her long-lasting homestay experience together with her compatriots in Japan last year.

Phan Thuan Thao, a composer and lecturer at the Hue Academy of Music in Thua Thien-Hue Province, located in central Vietnam, spent a unique homestay in October last year.

During the eight-day trip, Thao and 49 other people, who are staff and students from art colleges in Hanoi, Hue – the capital city of Thua Thien-Hue – and Ho Chi Minh City, enjoyed their cozy stay with their Japanese “foster parents and siblings.”

Though many people have visited Japan, few have the opportunity to enjoy homestaying with native families as she and her students did, Thao said.

They landed the rare opportunity thanks to the JENESYS 2.0 project, a youth exchange program launched by the Japanese government in January 2013.

“The homestay was what I most looked forward to about the trip, as I stayed at hotels all the time during my previous visits to Japan. I will unlikely get the same opportunity during my later trips there,” she said.

Thao revealed that the organizer of the October 2014 trip provided her and the other Vietnamese with basic information regarding the families they were to stay with.

They were divided into groups of two or three people who would spend their time with different native families.

The lecturer and two male students of the Vietnam National Academy of Music were assigned to the home of a Japanese woman, whose husband’s family name is Nohara.

Mrs. Nohara is the chair of a non-governmental organization in Japan, while her husband is a consultant to a large company.

The homestay activities began with a meeting between the host families and Thao and 24 other Vietnamese.

Twenty-five others were destined for Okayama Prefecture.

After the meeting, the “children” followed their “foster parents” to their homes in different places in Nara Prefecture.

Thao’s “foster mother” looks younger than her age of 61.

Their home, which measures around 70m² and has three floors, nestles in a tranquil neighborhood, some 15 minutes on foot from a metro station.

The first thing Mrs. Nohara did was bring Thao and the two students to her altar to the Buddha, where they prayed for a peaceful stay.

Thao then followed her mother to the kitchen, where they prepared dinner, while the two male students relaxed in the living room.

As soon as dinner was ready, Mr. Nohara, a man with a kind face, arrived home from work.

After dinner, the couple took their “adopted children” to one of their neighbors, where they marveled at a traditional Japanese tea drinking ceremony.

At nightfall, while Mrs. Nohara was preparing the mattresses for Thao to sleep on, she insisted that the Vietnamese lecturer not face her head toward the north, which is associated with the deceased.

During the following days, the woman took Thao and the two students to Osaka, a bustling city in Kansai, which is around half an hour by train from Nara Prefecture.

After several hours of walking and shopping, she treated Thao and the two lads to a meal in a restaurant, though her husband had already prepared dinner at home.

She always made sure breakfast was served as soon as Thao and the two young men woke up.

They also spent cozy moments in the living room, where one of the two students played the piano and Mrs. Nohara played the flute and savored the fragrant, sizzling tea.

The eight-day homestay passed in the blink of an eye and left an ever-lasting impression on each of the Vietnamese guests.

The students brimmed with excitement, sharing they were taught fencing, “origami” (traditional Japanese paper folding art), calligraphy and donned “kimono” among other activities.

On the tearful farewell day, both the “adopted children” and “parents” did not want to say goodbye.