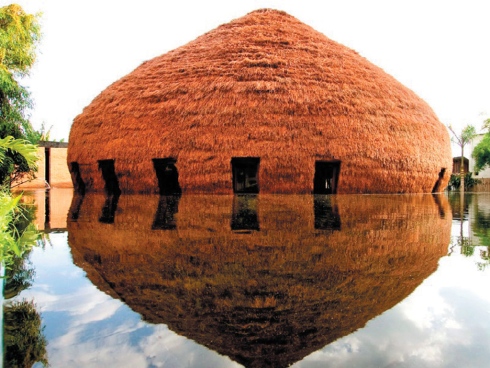 A Vietnamese architect who has claimed numerous international awards for his environmentally-friendly designs and been featured on CNN has launched his first book on architecture.

Nghia’s prize-winning, environmentally friendly architectural designs have been featured for the first time in the book.

“As today’s architects, our top priority is to bring green to the Earth. Architects can perform this task their own way, by growing trees on roofs, fronts and as many places (if possible) as they can in the same structure,” Nghia said in his book’s preface.

The architect said tropical countries are historically used to living in harmony with nature, as their cultural identities thrive based on jungles.

“Generally speaking, architecture is designed for humans, but in our opinions, architecture is also intended for vegetation. It’s the harmony that will help the Earth sustain and nurture humans’ livelihood,” he remarked.

“Some young people told me that Nghia loves doing bizarre things in order to take home prizes," Loan said at the Thursday workshop. "However, as far as I know, his ideas, topic matters, and approaches are so simple that we sometimes never visualize them, and we thus find them eccentric when stumbling upon them.”

Nghia appeared in the January episode of CNN’s ‘Ones to Watch’ program, which aims to shine a light on up-and-coming creative talent set to be the next big names in culture and the arts.

He was selected for the show by international architect David Adjaye, the man behind the new Smithsonian National Museum of African American History and Culture in the U.S.

The Vietnamese architect was introduced as adamant about using raw materials from his home country, like bamboo, to build homes for the people who live there.

In June, his “House for Trees,” designed in collaboration with Masaaki Iwamoto and Kosuke Nishijima from Japan, led the race for the 5th AR House Awards 2014 presented in London as it was considered the best work to help deal with urban pollution.

Two months earlier, his “Binh Thanh House” in Ho Chi Minh City was recognized as “Building of the Year” by Archdaily, a world-leading website dedicated to architecture.

In March, Nghia was also one of the two young Vietnamese talents to be selected as Young Global Leaders, an annual title conferred by the World Economic Forum.