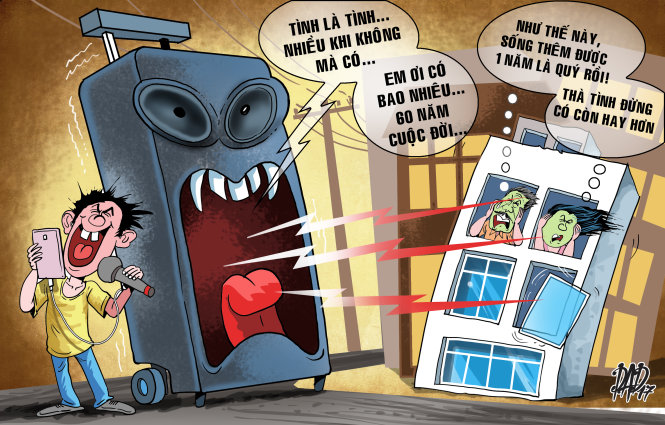 Having a karaoke-addicted neighbor is a nightmare, but the proliferation of ‘mobile karaoke,’ whereby anyone with a bluetooth microphone and a smartphone app can be a singer at anytime, anywhere, only serves to worsen the situation.

Wireless microphones, working with smartphones and tablets via any Bluetooth connection, are sold widely in Vietnam at affordable prices, allowing people to show off their singing talent without having to afford costly machines or equipment.

Unsurprisingly, not all karaoke singers have golden voices, and their performances have become nightmares for listeners with no choice but to endure their ‘performances.’

People in residential areas across the southern city have complained that they are losing sleep over the awful karaoke shows of neighbors, who use the mobile devices.

What’s worse is that it’s not easy for authorities to crack down on them.

“We have to prove that these singers violate acceptable noise limits, but there is a lack of equipment available to do so,” Thu was quoted as saying by Thanh Nien newspaper on Wednesday.

Cao Trung Son, director of the Ho Chi Minh City environmental monitoring center, admitted that the city only has noise pollution and noise monitoring stations installed in specific locations, and that “equipment exclusively designed to measure karaoke noise does not exist.”

As a temporary solution, Thu said local police and other relevant authorities would attempt to increase awareness among residents that they should not create excessive noise with their karaoke habit.

‘Victims’ of ‘mobile karaoke’ can also call the city’s hotline 0888247247 to file a complaint, as police will strictly handle any case that seriously affects residential security, the deputy chairwoman added.

Nguyen Dong Tung, deputy chairman of Phu Nhuan District, said his administration had so far received no report or complaint regarding ‘mobile karaoke’ though he knows the phenomenon exists in the locale.

“Even so, we will patrol wards in the district and any ‘singer’ that makes noises after 11:00 pm will be subject to administrative fines,” Tung told Thanh Nien.

“If police show up and ask them to stop singing, they will not repeat the mistake,” he assured.