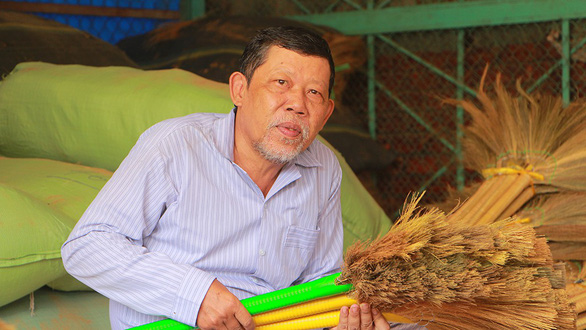 A Vietnamese man from the Mekong Delta province of An Giang has been playing an important role in the preservation of grass broom making, a popular traditional craft in several localities across Vietnam.

The man is 60-year-old Nguyen Ngoc An, who has dedicated half of his life to the production of grass brooms through thick and thin.

The craftsmanship took root in the village some half a century ago when a woman named Sau Hon showed local people how to make brooms from the flowers of the Thysanolaena latifolia plant, according to An.

The plant has other popular names including 'tiger grass' and 'broom grass', the latter referring to its wide usage in broom-making across Asian countries.

“Making grass brooms helped us get by,” An told Tuoi Tre (Youth) newspaper as he recounted how his family first tried their hands at the craft.

Members of An’s family, like many other locals in Con Nho, used to navigate by boat to neighboring provinces in the Mekong Delta, such as Kien Giang and Ca Mau, to collect tiger grass for broom-making.

At first, broom makers greatly benefited from the plant's abundance in the wild, as it was basically free for the taking.

However, the source of the crucial broom-making material was quickly depleted due to deforestation for cultivation.

An thus had to travel to different localities, including the Central Highlands provinces of Kon Tum and Dak Lak and the north-central province of Quang Tri, to look for the down-like grass.

He eventually found his luck in a Laotian province, which borders Quang Tri Province, with boundless fields of the Thysanolaena Latifolia plant.

“I was really happy, as successfully discovering a source for the material means that our broom-making craft can be maintained,” he said.

Shortly after An started to import the tiger grass from Laos, he got a large order for exporting grass brooms to Malaysia and Australia from a trader.

“I knew it’s a one-in-a-million chance and immediately grasped it,” An said, adding that the two sides have kept the business going until now.

An’s broom-making business has grown bigger as time goes by, and it now provides jobs with decent income to local people.

“I’m able to make ends meet with this [broom-making] job,” said Nguyen Thi Nhanh, a housewife who has been making grass brooms since the age of seven.

Nhanh is only one of more than 30 broom makers working at An’s premise, and among 850 craftsmen nurturing the traditional craft in Con Nho.

Tran Thi Kim Pha, vice chairwoman of the People’s Committee of Phu Binh Commune which administers Con Nho village, hailed that broom-making in general and An’s business in particular have made great contributions to the local economic development.

Pha told Tuoi Tre that the local authorities will provide more favorable conditions for the broom-making establishments to expand their businesses, creating jobs for more people.