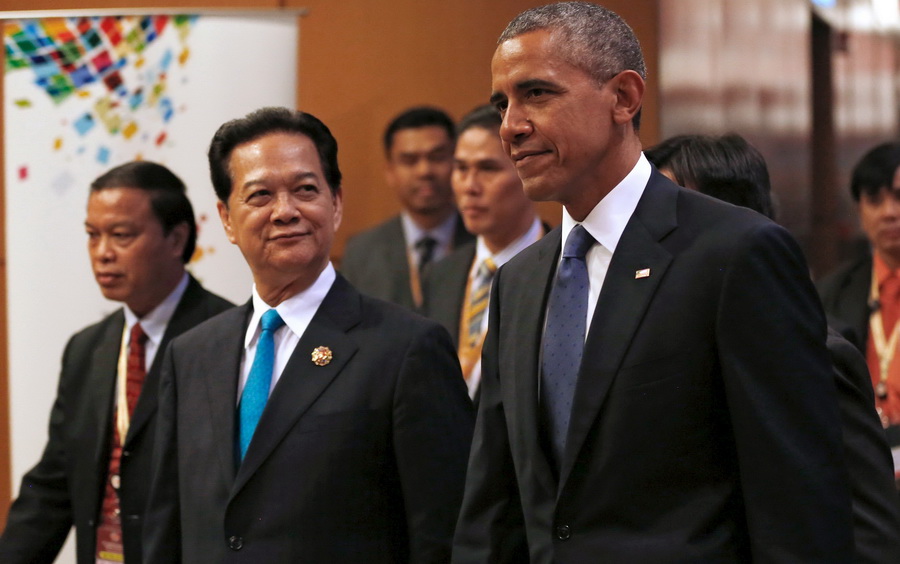 President of the United States Barrack Obama has accepted an invitation to visit Vietnam by Prime Minister Nguyen Tan Dung during a summit in Kuala Lumpur on Saturday, according to the Vietnamese Ministry of Foreign Affairs.

The two leaders met during the 27th annual summit of the Association of Southeast Asian Nations (ASEAN), which opened on Wednesday and concluded on Sunday in the Malaysian capital.

No time frame for the visit has been revealed, however.

The premier confirmed that Vietnam expects to further strengthen the comprehensive partnership with the U.S., the Ministry of Foreign Affairs said.

The Vietnamese head of government also asked the U.S. to take more action to contribute to peace, stability and prosperity in Southeast Asia, especially in the East Vietnam Sea.

The two nations should maintain existing ties to facilitate the ratification and implementation of      the Trans-Pacific Partnership Agreement (TPP) accord, President Obama said.

The TPP is a regional free trade agreement aimed at eliminating tariffs and lowering non-tariff barriers that was reached on October 5 by 12 countries throughout the Asia-Pacific region.

The countries include Australia, Brunei, Canada, Chile, Japan, Malaysia, Mexico, New Zealand, Peru, Singapore, the United States, and Vietnam, which collectively contribute almost half of global output and over 40 percent of world trade.

Washington supports Hanoi’s position on the East Vietnam Sea situation, and the two countries should develop a common voice with other ASEAN member states to enhance coordination in managing disputes by peaceful measures and on the basis of international law and regional agreements, the U.S. president added.

In talking with his Russian counterpart Dmitry Medvedev the same day, PM Dung proposed that Russia encourage the Eurasian Economic Union member states to soon approve a free trade pact to which Vietnam is also party.

Vietnam and Russia will urge competent authorities to prepare and soon establish the agenda for 2016, in order to convene an effective meeting of the Vietnam- Russia Intergovernmental Commission on November 25.

The agenda is slated to include the implementation of major projects on nuclear energy, oil and gas, automobile production and others.

With regard to current issues in the East Vietnam Sea, PM Medvedev reiterated the need for peaceful resolution of disputes under international law, including the 1982 United Nations Convention on the Law of the Sea.

A bilateral meeting between the Vietnamese prime minister and his Australian counterpart Malcom Turnbull was also held on Saturday.

Vietnam expects Australia to provide favorable conditions for Vietnamese agricultural and aqua-cultural products to enter the Australian market, according to PM Dung.

Prime Minister Turnbull replied by saying that his country hopes to welcome Vietnamese fruits, including mango and dragon fruit, later this year.

On Sunday morning, the Vietnamese head of government conferred with Indonesian President Joko Widodo on the enhancement of the two countries’ cooperation in politics, diplomacy, trade, investment, defense and security, and maritime spheres.

The Indonesian official also accepted the invitation to visit Vietnam by PM Dung, on behalf of Vietnamese leaders.