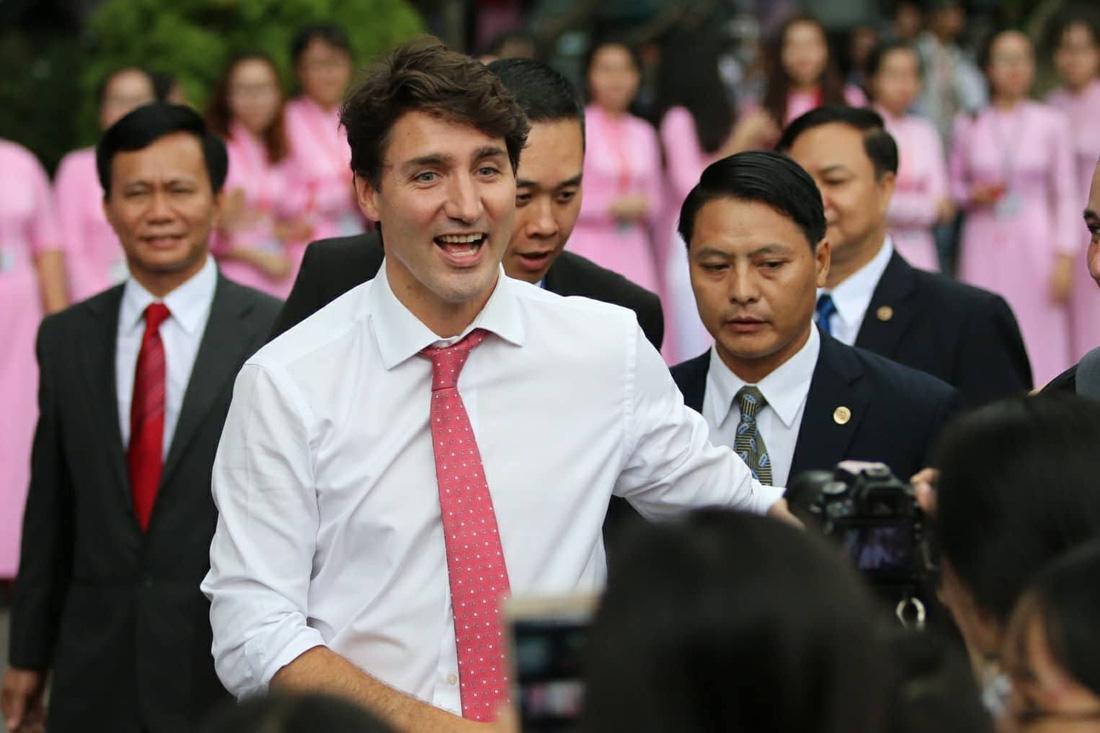 Canadian Prime Minister Justin Trudeau’s tight working schedule in Ho Chi Minh City on Thursday did not stop him from enjoying a day-end jog around the southern hub.

The leader has been in Vietnam since Wednesday for an official two-day state visit followed by attendance at several events within the framework of the APEC Economic Leaders’ Week in Da Nang.

Trudeau spent Wednesday meeting with Vietnamese leaders in Hanoi, where he and his Vietnamese counterpart Nguyen Xuan Phuc co-chaired a press conference announcing the historic establishment of a comprehensive partnership between Vietnam and Canada.

Trudeau hinted at the possibility of Canada providing support for the southern hub to realize its vision of developing into a ‘smart city,’ declaring ‘now’ as the golden moment for bilateral cooperation in urban advancement.

Before meeting with Phong, Trudeau made an appearance at the Ho Chi Minh City Stock Exchange (HoSE) to attend the daily gong-striking ritual used to launch the day’s trading session.

He also sat down for a 90-minute roundtable talk at HoSE with key Ho Chi Minh City business leaders.

At Ton Duc Thang University in District 7 that same afternoon, Trudeau confessed his once burning dream of becoming an educator during an inspirational speech he delivered to university students and staff detailing his own experience in overcoming roadblocks to success.

The 1,400-seat auditorium had already filled to the brim two hours prior to the Canadian leader’s arrival.

“Canada and Vietnam are partners. We have a relationship that is only getting stronger with time, and we must ensure that education remains a top priority going forward,” Trudeau said, reiterating Canada’s commitment to maintaining strong support for Vietnam’s education sector.

“You young people in this room may get told from time to time that you are the leaders of tomorrow,” he said. “But I don’t want people to tell you that anymore. I don’t want you to think of yourselves as leaders of tomorrow. Because this world, your communities need you to be leaders today. What you do, questions you ask, the actions you take, and your school and your community at home show that young people are already leaders.”

Trudeau concluded his busy Thursday with a laid-back visit to a street-side coffee house to chat with a senior employee from the Canadian Consulate General in Ho Chi Minh City over a glass of Vietnamese coffee.

In the evening, the sports-loving Canadian PM was spotted jogging along the city’s iconic Nhieu Loc – Thi Nghe canal, donning athletic gear with an escort of plain-clothed secret service agents.

Justin Trudeau flew to central Vietnam’s Da Nang City this morning to attend several events within the agenda of the APEC Economic Leaders’ Week, including a meeting with fellow members of the Trans-Pacific Partnership (TPP) agreement to discuss the trade deal’s future.

Established in 1989, the Asia-Pacific Economic Cooperation (APEC) is a regional economic forum comprised of 21 Pacific Rim member economies, including Canada and Vietnam.

Da Nang took the baton this year as host to the group’s annual summit of leaders, the culmination of Vietnam’s year-long hosting of APEC events.