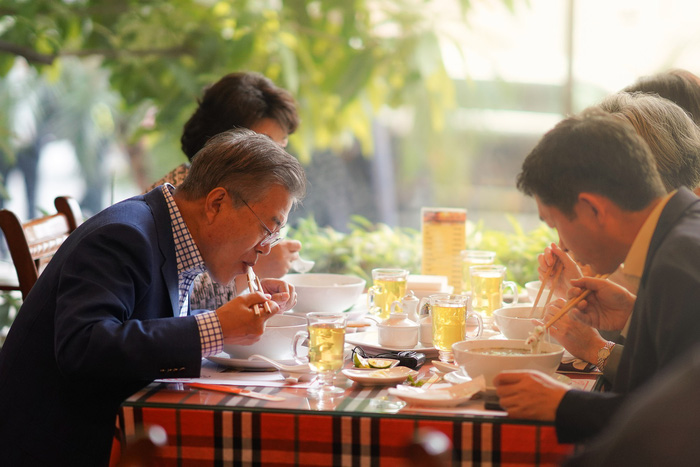 South Korean President Moon Jae-in and his spouse had pho, Vietnamese typical dish, for breakfast in their last morning in Hanoi before concluding a two-day state visit to Vietnam on Saturday.

Tien added that a team of security officials visited his store last week, and they conducted the last check on the ingredients early on Saturday, before the president’s arrival.

The restaurant representative that the South Korean president spoke highly of their food.

A member of the South Korean delegation said pho stores are not hard to find in South Korea, but the taste here is much more special and delicious.

Upon tasting the pho, the visiting leader talked and shook hands with South Korean expats in Vietnam, who had been waiting outside the restaurant. President Moon Jae-in left Vietnam at 11:00 am, wrapping up a two-day visit to the country.

The South Korean leader held talks with Vietnamese State President Tran Dai Quang in Hanoi on Friday, during which they witnessed the signing of six memoranda of understanding on cooperation in the fields of trade, labor, information, industry, traffic and construction.

Upon the talks, the guest said South Korea will “contribute” to Vietnam’s goal of becoming an industrialized economy by lifting bilateral trade to $100 billion by 2020.