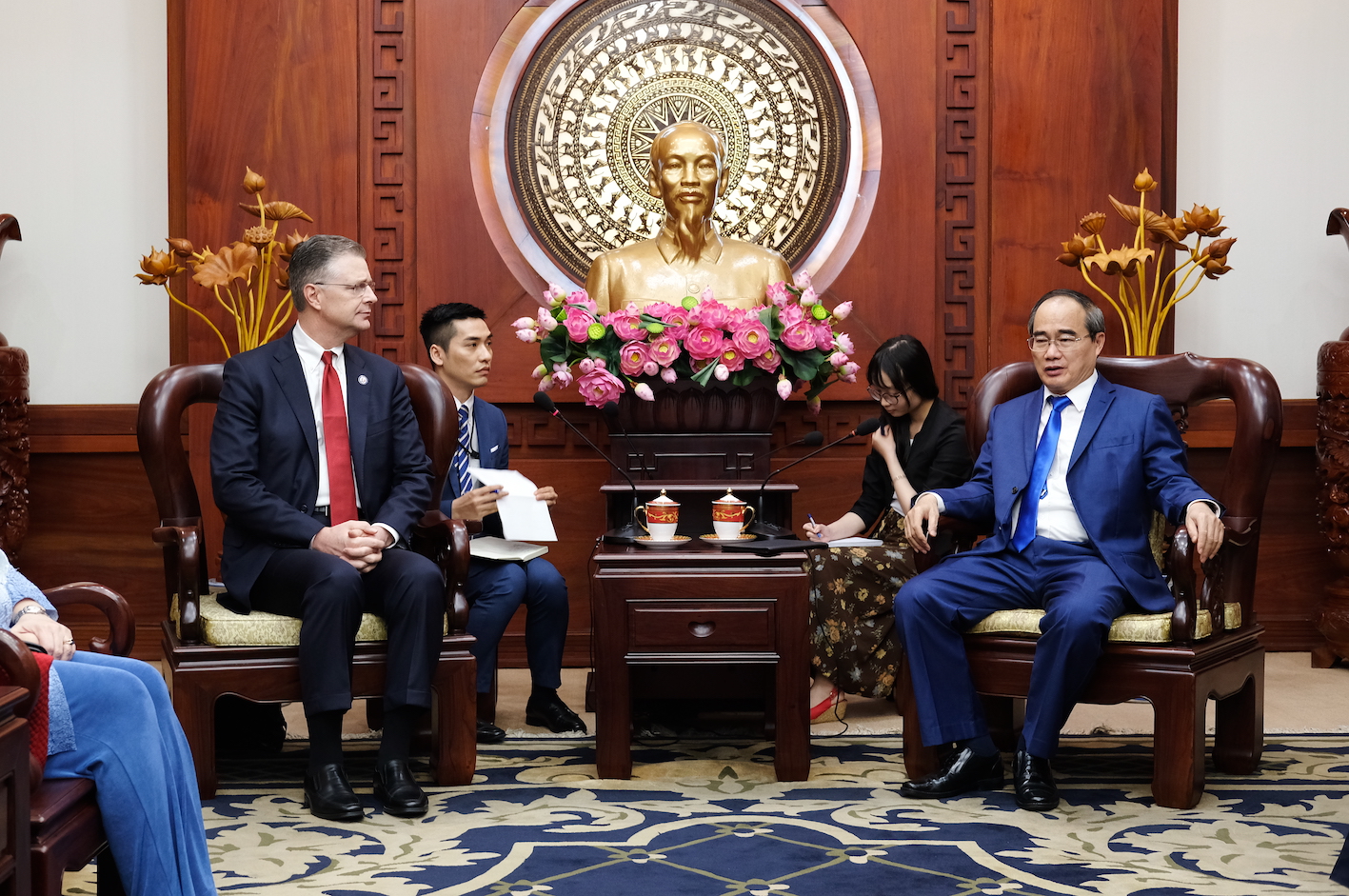 Ambassador Kritenbrink met Secretary Nhan on the former’s working trip to the city to promote the 25th anniversary of diplomatic relations between the two countries.

“We are investing in Vietnam’s success,” Ambassador Kritenbrink told the city leader, noting that economic, trade, and investment ties play an important role in the Vietnam-U.S. relations.

He emphasized that the U.S. has a national interest in having a strong and successful partnership with Vietnam.

In response, Nhan said that Vietnam and the U.S. have common interests in developing peace and solving common problems.

He called on the U.S. to continue investing in Ho Chi Minh City’s projects such as its new ‘Eastern City’ that encompasses Districts 2, District 9, and Thu Duc District.

The idea of such an ‘innovative urban area’ was first announced by Nhan in early February 2018.

The tri-district hub, which has a total population of about 1.17 million people and a total area of 211.76 square kilometers, is expected to play a core role in the city’s strategy to embrace the Fourth Industrial Revolution.

On the topic of defense cooperation between the two countries, the city leader mentioned the visits to Vietnam of U.S. military vessels, such as the aircraft carrier USS Theodore Roosevelt's port call in March 2020, to help promote mutual understanding and demonstrate the goodwill of Vietnam and the U.S. to work together for peace and security in the region and the world.

Ambassador Kritenbrink said defense and security cooperation with Vietnam is very important to the U.S.

He assessed that bilateral cooperation in this area has seen many achievements, including the United States’ assistance in strengthening the capacity of the Vietnam Coast Guard.

“We are very proud to be Vietnam’s partner on issues like the [East Vietnam] Sea,” he said, emphasizing that all countries must play by the rules of international law.

The city’s Party chief expressed appreciation for the U.S. efforts in settling the negative effects of the war, especially the dioxin decontamination projects in Da Nang and Bien Hoa.

In return, the American ambassador thanked Vietnam for its assistance in the search for the remains of American soldiers missing in Vietnam.

Due to the impact of the COVID-19 pandemic, many activities to celebrate the 25th anniversary of Vietnam-U.S. relations have not been organized as planned.

Despite this, the U.S. ambassador hailed Vietnam’s control of the COVID-19 epidemic and thanked the nation for its support of the United States’ response to the crisis.

Secretary Nhan affirmed that the city would ensure diplomatic and economic activities planned for the rest of 2020 are on track to mark the important milestone in bilateral ties between the two countries.

District 9 is home to the Saigon Hi-Tech Park, one of the leading of its kind in Vietnam, while Thu Duc District is where the city’s ‘university village’ is located.

The ‘village’ houses the campuses of eight universities and colleges, with more than 1,300 PhD holders and over 69,000 students working and studying regularly there.

Meanwhile, a new financial center of Ho Chi Minh City has been on the blueprint in District 2, completing an innovative urban hub dubbed the southern metropolis’ ‘Eastern City.’