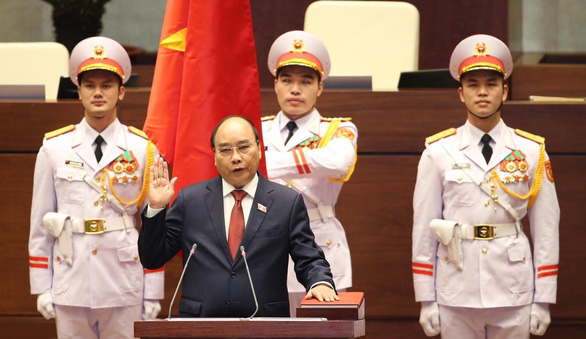 The election was confirmed in a vote and documented in a resolution.

Phuc swore allegiance to the nation, people, and constitution in a swearing-in ceremony.

“I’ll make an effort to complete the missions assigned by the Party, state, and people,” he swore during the televised ceremony in Hanoi.

On April 2, the National Assembly passed another resolution with a 93-percent vote to relieve Phuc as prime minister, whose five-year term ended accordingly.

He had been nominated for the presidency. This was the first time an incumbent prime minister had been tipped as a future state president.

The resolution took effect on Monday so Phuc had continued taking on the prime minister’s responsibility since last week, the legislature said.

Born in 1954 in Quang Nam Province, Phuc assumed office as prime minister on April 7, 2016, according to his biography.

Phuc was deputy secretary of the Quang Nam Party Committee and chairman of the provincial People’s Committee from 2001 to 2006 before ascending the ranks at the central government level.

Pham Minh Chinh, chief of the Party's Central Organization Commission, has been tipped as the country's next prime minister, as Tuoi Tre (Youth) newspaper understands.

The legislature will elect a new prime minister on Monday afternoon.

Trong, Phuc, and Chinh are members of the all-powerful Politburo of the Communist Party of Vietnam.