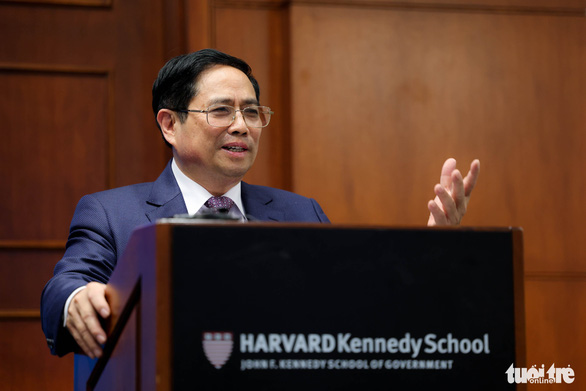 Vietnamese Prime Minister Pham Minh Chinh focused on Vietnam’s economic development policy based on independence, self-reliance, and international integration in his speech at Harvard Kennedy School in the U.S. on Saturday.

PM Chinh visited the school and attended a policy powwow as part of his trip to the U.S. and participation in the U.S. - ASEAN Special Summit from May 11 to 17, at the invitation of U.S. President Joe Biden.

In his remarks, the Vietnamese government chief emphasized the building of an independent, self-reliant but deeply integrated economy in Vietnam.

Chinh said that the world has recently seen a lot of complicated and unpredictable developments which give rise the need for many countries to pay attention to boosting the self-reliance and independence of their economies to lessen the impacts of external shocks.

However, this should not mean isolation from the world, but it should go in parallel with an open-door policy and international integration, the Vietnam News Agency (VNA) cited the PM as saying.

Vietnam has both engaged in extensive international integration and made great efforts to improve its internal capacity, flexibly and effectively respond to external shocks such as the 1997-98 Asian financial crisis, the global financial crisis in 2007-08, and the COVID-19 pandemic from 2020 to now, the PM stated.

The first is to contribute to addressing the major socio-economic challenges Vietnam is facing.

Next, the country wants to ensure its independence, sovereignty, and national interests.

Finally, it aims to improve its capacity for integration into the global economic system, as well as for the implementation of international commitments.

Such an economic model banks on three pillars, namely setting up a socialist-oriented market economy, building a socialist rule-of-law state, and establishing a socialist democracy, the VNA reported.

Like other developing countries, Vietnam wants to build an independent, self-reliant economy, while speeding up industrialization and international integration to escape the middle-income trap on the way to becoming a developed nation, Chinh said.

The PM affirmed Vietnam’s consistent policy of reform, ‘open doors,’ and international integration, whereby the government facilitates and protects the legitimate interests of businesses and trade partners in the spirit of ‘harmonized benefits, shared risks’ and compliance with the law.

Vietnam wishes to be a good friend, a reliable partner, and a responsible member in addressing regional and international issues for the sake of global prosperity, PM Chinh underscored.

Regarding the Vietnam – U.S. relations, Chinh said the bilateral ties have grown fruitfully since the two nations normalized their ties in 1995, adding that in the 27 years since then, four successive U.S. presidents have visited Vietnam.

The two nations have overcome their differences and reached fundamental principles for their relations, as affirmed in the Vietnam - U.S. Joint Vision Statement issued when Vietnam’s Party General Secretary Nguyen Phu Trong visited the U.S. in 2015, which underlined respect for each other’s political institutions, independence, sovereignty, and territorial integrity, the VNA cited PM Chinh as saying.

The Vietnamese government chief also highly appreciated the U.S. policy to support a strong, independent, and prosperous Vietnam and affirmed that the U.S. is one of the leading partners of the Southeast Asian country.

Addressing the powwow, Professor Thomas J. Vallely, director of the Vietnam Program at Harvard Kennedy School, said the school has carried out policy dialogues with Vietnam for the past three decades, focusing on helping solve the biggest challenges confronting Vietnam in different periods.

He also noted that six out of 12 members of the Vietnamese delegation led by PM Chinh to the U.S. had once studied at the school.

The school’s dean, Douglas Elmendorf, also expressed his interest in Chinh’s speech and briefed the meeting on Chinh’s great success when he was secretary of the Party Committee of Quang Ninh Province in northern Vietnam in the 2011-15 period.