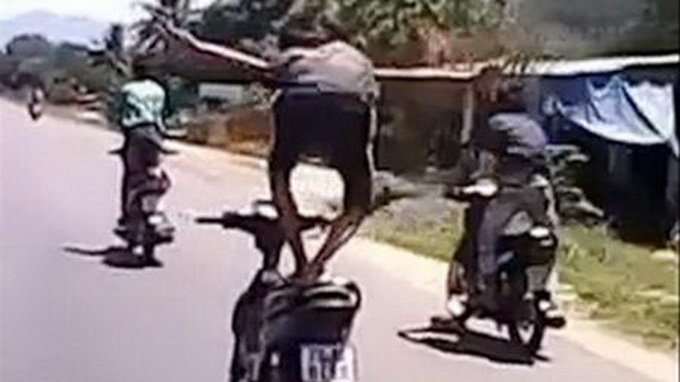 They are Tran Quoc Linh, Pham Van Tho and, Nguyen Van Tam. All of them are 18 years old, said Senior Lieutenant Truong Van Ty, deputy head of district police. Linh and Tho live in Cam Lam, while Tho resides in Dien Khanh District.

The district police had tried to track them down after being reported about a striking video clip posted on YouTube late last month.

As shown in the six-minute clip, these young men performed martial art moves and many dangerous acts while riding motorbikes at high speed and shouting loudly on the National Highway No 1 on April 25. All of them did not wear a crash helmet but wore face masks to make themselves hard to identify when they “performed” on the highway’s section from Dien Khanh District’s Suoi Hiep Commune to Cam Lam District’s Suoi Cat Commune. Their acts included not holding the bike handlebars, controlling their motorbikes only with their legs on the vehicles’ seats, gesticulating wildly while travelling, and some others. Such reckless acts have caused furious reactions from viewers. At a meeting with the police on May 14, the three young men admitted to their violations on traffic regulations but they said they did not know who had videotaped their stunts and posted the clip on the Internet.

After collecting enough evidence for the young men's violations, the Cam Lam District police will refer the case to the Khanh Hoa Province police for handling.