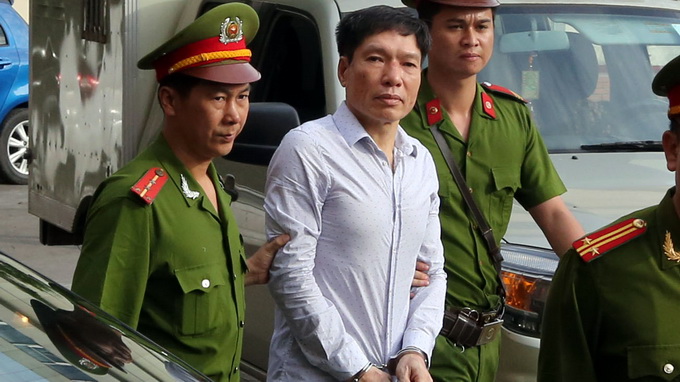 An appeal court in Hanoi gave a two-year commutation on Friday to Duong Tu Trong, former deputy director of northern Hai Phong City Police Department, who was earlier sentenced to 18 years in jail for “organizing other persons to flee abroad.”

In January this year, Trong and his six accomplices were sentenced for “organizing other persons to flee abroad illegally”.

Trong was sentenced to 18 years behind bars while the terms of the other defendants range from 5 to 13 years. Trong and five of the six other convicted appealed their sentence for slighter punishment. At their appeal hearing opened on Friday, the Supreme People’s Procuracy said it had reviewed the levels of crime of all the six defendants and proposed that the Supreme People’s Court give them a commutation. After taking all into account, the court decided on the same day to reduce Trong’s sentence to 16 years while upholding the existing sentences for all the five other defendants. Trong was given a commutation as he fully pleaded guilty and showed sincere repentance of his deeds during the appealing hearing, said the court.   Meanwhile, judges upheld the existing sentences for the five other defendants, saying there were no grounds for giving any commutation to them. According to the indictment, on May 17, 2012, Dung, then director of the Vietnam Maritime Administration, began to flee after receiving a tip-off revealing that he was about to be arrested for the offenses he earlier committed during the time he was chairman of Vinalines. With the help of Trong and others, Dung left Vietnam for Cambodia in May 23, 2012 and then went to Singapore, where he carried out procedures to go to the US. However, as he was being internationally hunted, he was not allowed to enter the US.

He then returned to Singapore and then to Cambodia to hide. On September 4, 2012, Vietnamese police arrested Dung with help from their Cambodian counterparts and later extradited him to Vietnam. Dung was sentenced to death on December 16, 2013. He appealed for a commutation, but the Supreme People’s Court upheld his sentence at the appealing hearing on May 7, 2014.