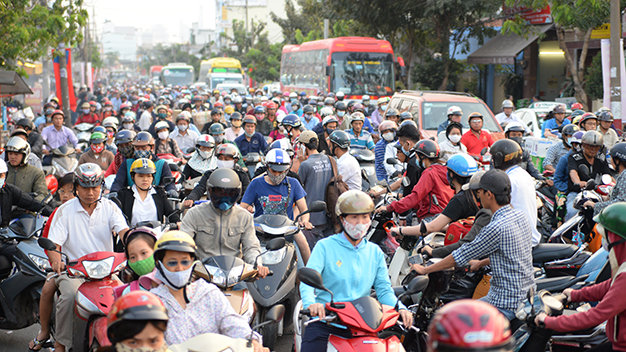 The Ho Chi Minh City Department of Transport has announced specific routes for vehicles traveling into and out of the metropolis in a bid to reduce traffic congestion ahead of the Lunar New Year.

A large number of vehicles are expected to put immense pressure on the eastern and western entrances of the southern Vietnamese city before and after the traditional holiday, posing a high risk of traffic gridlock.

The Lunar New Year (Tet) is due on January 28, before which a large number of Ho Chi Minh City residents are anticipated to leave the city for their hometowns or go on vacation in other provinces.

According to the municipal Department of Transport, about one million people are expected to leave the metropolis during the period.

Nguyen Hoang Huy, deputy director of the Mien Dong (Eastern) Bus Station in Binh Thanh District, said that passenger numbers would increase by three percent year-on-year, explaining that the peak number of passengers in the week before Tet is generally between 35,000 and 56,000 per day.

Traffic jams are very likely to happen on National Highway 13 given the volume of traffic, Huy assessed, adding that an additional route on the Hanoi Highway has been proposed to alleviate problems.

The Mien Tay (Western) Bus Station in Binh Tan District also predicts some 54,000 to 58,000 travelers per day during the period, mainly travelling to provinces in the Mekong Delta.

The city’s transport department has announced two additional routes for vehicles starting from each bus station to prevent serious congestion at entrances to the southern hub.

The agency has also asked its equivalents in neighboring provinces, namely Tieng Giang, Long An, Dong Nai, and Binh Duong, to assist their efforts by guiding vehicles to travel on the correct route as well as carrying out regular patrols and promptly dealing with potential gridlock.

People’s committees at district levels will be in charge of keeping order and security at local bus and railway stations and on major roads leading out of the city.

According to Ngo Hai Duong, head of the Road Infrastructure Management and Exploitation Division under the transport department, certain measures will be applied to curb traffic jams in inner city areas.

Accordingly, relevant authorities will sternly deal with illegal parking along the city’s streets while requesting developers of road construction projects to minimize their constriction site to avoid compromising traffic flow.

A website is scheduled to be opened by the transport department this week to give updates on the traffic situation on major streets.

Local administrations will also ensure that there will be no encroachment onto sidewalks and roadways during the period, Duong said.