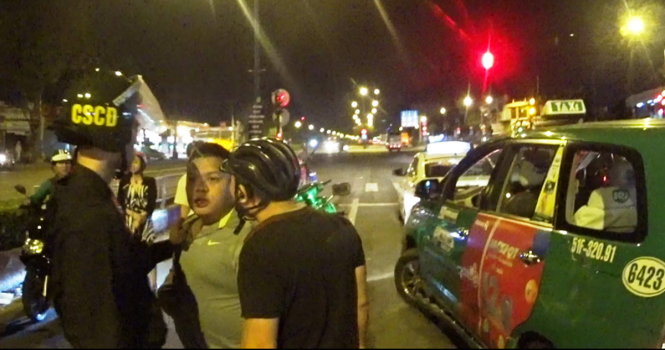 A man under drug’s influence was caught driving wrong way on a street in Ho Chi Minh City with a stolen taxi, before being arrested after a high-speed chase with police at dawn on Wednesday.

The cab thief, Chau Khac Thanh, 22, is being detained on charges of stealing assets, District 3 police said later in the morning.

Thanh, hailing from the northern province of Thanh Hoa, stole a taxi in District 3 and drove to Tan Binh District, where he was arrested.

Traffic police on patrol in Tan Binh had already been notified of the taxi theft when they found a cab speeding in the wrong direction on Phan Dinh Giot Street near the Hoang Van Thu intersection at 1:00 am.

When officers attempted to approach the stolen cab on two police cars, Thanh geared up and took on the flyover to enter Cong Hoa Street.

As the chase continued, the man caused a traffic chaos by driving dangerously through several streets, and was only stopped by police officers and local residents at the Truong Chinh – Pham Van Bach intersection.

The driver stayed inside the car for a while before officers could take him to the Tan Binh police station for investigation.

Thanh, who has only moved from Thanh Hoa to Ho Chi Minh City for a month, tested positive for amphetamine, according to District 3 police.