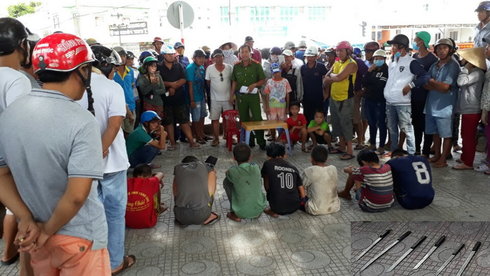 Police on Phu Quoc have admonished a group of seven children who have been committing numerous crimes against tourists on the island off southern Vietnam.

All of the juveniles, aged between 11 and 13, live with their parents in different communes of the island, but prefer life on the streets to staying at home with their families.

The children have formed a gang, and normally hang around the Cau Palace, a must-see attraction on Phu Quoc Island.

Many tourists have agreed to pay the young muggers for fear of their own safety, according to police.

The juveniles have also pickpocketed and stolen assets in multiple opportunist crimes.

Phu Quoc police have said that most of the gang of seven display symptoms of a glue sniffing addiction. Glue sniffing is one of the cheapest ways for teenagers to get high, with the glue’s vapors delivering a short term feeling of euphoria.

Upon searching the temporary residence of the children, police found a number of homemade swords. The children admitted to using the weapons to attack tourists or damage their motorbikes if they refused to give them money.

On Tuesday, the street kids were publicly reprimanded and given notice that they would be sent to foster care if they continue their activity.