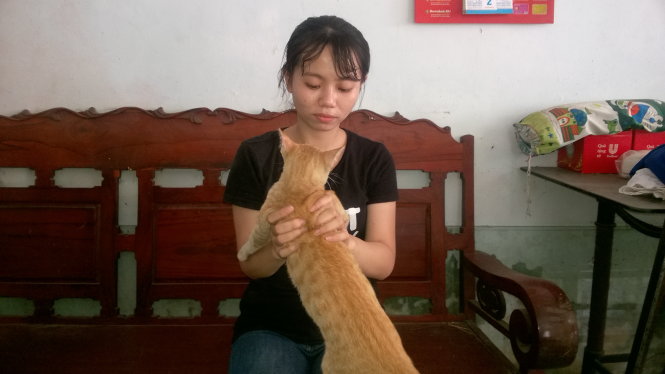 A female passenger was forced off a Phuong Trang bus in the middle of nowhere just after midnight on Wednesday after she had refused to let go of a cat she snuck aboard in her backpack.

Cats are considered taboo by Vietnamese drivers, who think the feline animal can bring bad luck to their journey.

Around 1:00 am the following morning, the bus driver and his assistant discovered that Ha had hid a cat in her backpack and demanded that she either leave the animal on the street or both she and the cat disembark from the vehicle.

“I begged them to let me sit at the front of the bus so as not to disturb other passengers, since it was only 30 kilometers away from my house,” Ha recalled.

“But they refused, and insisted that I throw my cat off the bus or they would force me off the bus. And they did.”

Ha continue recalling that she couldn’t leave my cat behind so I asked the driver to drop me off somewhere with a hotel or motel so I could stay overnight."

Instead, he shut the door in her face and drove away, after dropping her to the street.

“I thought they were giving me empty threats about throwing the cat away. I couldn’t imagine they would actually leave a woman alone on a deserted road in the middle of the night.”

Afterwards, Ha walked for over 20 minutes on the dark and deserted road until she reached a motel where she was able rent a room for the night.

“It was only after I found a motel that the bus attendant called and asked if I needed them to come pick me up, on the condition that I would pay for the extra fuel costs,” Ha said.

“When I disagreed, he told me that he had done his responsibility and that I shouldn’t sue the company.”

Ha then reached Phuong Trang Buslines’ customer service hotline to voice her complaints, only to be told that the fault had been hers and that the company reserved the right to treat her the way they did.

Nguyen Van Truong, the attendant on the Phuong Trang bus that Ha had been forced off, confirmed the whole ordeal with Tuoi Tre (Youth) newspaper.

According to Truong, it is an unwritten rule that cats are not allowed on Phuong Trang buses since they are believed to bring bad luck.

“Was I supposed to let 40 passengers suffer from bad luck because one passenger brought a cat?” Truong said.

“If it had been a dog, we would have let her keep the pet in the cargo room, but we can’t make exceptions for cats.”

Truong said he didn’t know whether it was Phuong Trang’s protocol to force passengers off for bringing cats on the bus, but insisted that “every driver is aware of this taboo”.

According to lawyer Truong Xuan Tam, member of Vietnam Bar Association, the country’s law on traffic dictates that passenger buses are not to transport dangerous and smelly goods, or live animals and other cargos that may affect the well-being of passengers.

However, Tams asserted that the bus driver and attendant could have handled the situation more humanely by at least dropping the passenger off at a safe place, or asked for the opinion of other passengers on letting her continue the journey.