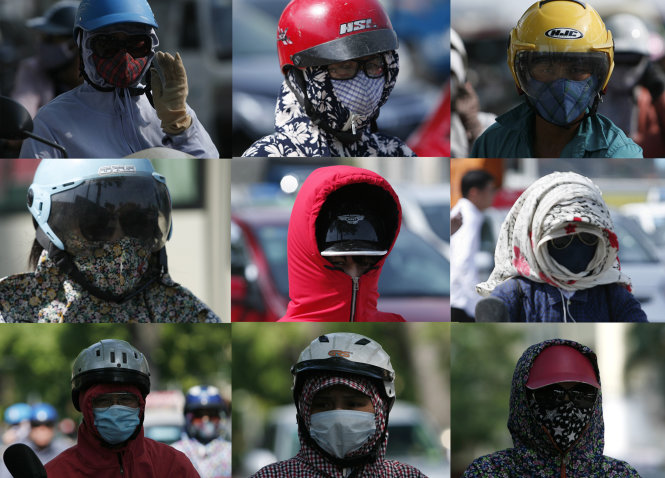 Extreme weather is taking a toll on people in Hanoi, with temperatures exceeding 40 degrees Celsius at some places.

Few would get out to the street without fully covering themselves from head to toe these days.

People who have to work on the street would try to hide under shades whenever they could and it is easy to spot people going out with a bottle of water so they can quench the thirst at anytime.

A heat wave has been roasting Hanoi and northern Vietnam since the middle of this week and is forecast to well linger to next Tuesday.

According to data reviewed by Tuoi Tre (Youth) newspaper, this is the most severe hot spell to hit the north in the last 14 years.

On Friday, the whole region suffered from sweltering weather, with readings from 37-40 degrees Celsius.

The temperature in the area near the Lang Fortress in Hanoi yesterday was as high as 40.7oC, and 41.5oC in the capital’s Ha Dong District.

On Saturday and Sunday, the scorching heat is expected to continue roasting the northern region and the north-central and south-central provinces from Thanh Hoa to Phu Yen, with temperatures ranging from 37 degrees Celsius to 40 degrees Celsius.

Below are some photos of people in Hanoi suffering the blistering heat.

A worker wearing a hat under her hard hat is seen on the Nhon – Hanoi urban railway construction site - Photo: Tuoi Tre

A group of students hide behind the station while wating for their bus - Photo: Tuoi Tre

A boy hides from the sun with a sheet of plastic - Photo: Tuoi Tre

A traffic police officer is on duty under the baking sun - Photo: Tuoi Tre

A group of salinity workers eat ice-cream to fight against the heat on Nguyen Trai Street - Photo: Tuoi Tre

A local waters the street in front of an establishment on Thuy Khe Street - Photo: Tuoi Tre