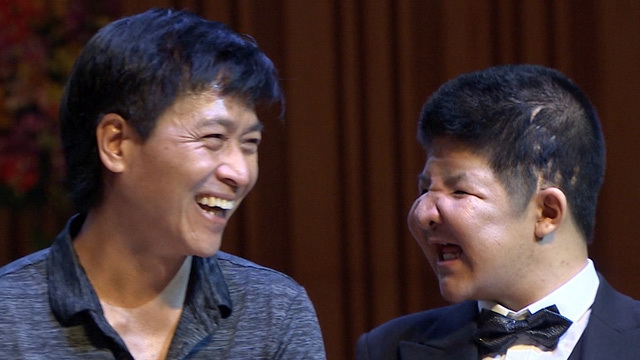 A teenager suffering a rare genetic disorder and his parents, one of whom is a beloved artist, have caused quite a stir after triumphing over his debilitating illness to secure a spot at his dream music school in Vietnam.

Nguyen Anh Tuan’s story has moved many to tears and inspired those with a similar fate.

He is the only son of Meritorious Artist Quoc Tuan, who is also a seasoned film and stage director, and his wife, Thuy Minh.

Anh Tuan, also known as Bom, has just made it into a seven-year piano jazz program of the Vietnam National Academy of Music in Hanoi.

The little boy suffers Apert syndrome, a rare genetic disorder characterized by the premature fusion of certain skull bones (craniosynostosis), according to ghr.nlm.nih.gov.

This early fusion prevents the skull from growing normally, which leads to a sunken appearance in the middle of the face, bulging and wide-set eyes, a beaked nose, and an underdeveloped upper jaw leading to crowded teeth and other dental problems.

Early fusion of the skull bones also affects the development of the brain, which can disrupt the patient’s mental growth.

The 15-year-old Bom has undergone 10 surgeries, including major ones to fit his skull with his growing brain.

The boy and his loving father recently appeared in a reality show called ‘Dieu Uoc Thu 7,’ literally translated as ‘The Saturday Wish,’ aired by national broadcaster Vietnam Television to help turn the hopes and dreams of Vietnamese people struggling with adversities into reality.

With no cures available for the syndrome in Vietnam back in 2002, his parents have sought treatment at hospitals across the country and abroad, including Australia and South Korea.

The marriage of Quoc Tuan and his wife was once on the verge of breakdown as both were under overwhelming pressure to seek treatment for their son.

Just like any other families, Quoc Tuan and his wife were expectantly awaiting the birth of their first son in 2002.

Pre-natal examinations did not show any abnormalities.

Quoc Tuan was numb at the first sight of his newborn: the neonate had an underdeveloped upper jaw, a short, flattened forehead, and webbed fingers and toes.

“I held my baby’s little hand which clutched mine surprisingly firmly. I knew we would fight together and everything would be alright,” Quoc Tuan recalled.

Dr. To Manh Tuan, vice-head of the Department of Surgery at the Central Pediatrics Hospital, located in Hanoi, was among the doctors who conducted the operations to separate Bom’s fingers when he was a little child.

The doctor shared he was moved to tears at Quoc Tuan and his wife’s simple wish that their son would grow up normally, but he knew it would be a daunting ordeal.

Over the past 15 years, due to exorbitant expenses, Quoc Tuan has alone taken his son abroad for treatment.

“The family is among the most active in seeking treatment for their child. The costs are huge, but their efforts are far beyond that,” Dr. Tuan noted.

Quoc Tuan and his wife waited anxiously every time their son’s bandage was removed following his surgeries.

On the back-to-school day at the Vietnam National Academy of Music earlier this month, Bom appeared onstage and gave a rousing performance in dedication to his parents, who sat proudly in the audience with tear-filled eyes.

“We have admitted Bom into our school not out of sympathy for his illness but because he is a real budding talent,” Dr. Nguyen Tien Manh, of the school’s Jazz faculty, said.

“The boy absolutely deserves the success for all his herculean efforts. He practices on the piano eight to ten hours a day, while most of his peers prefer surfing the Internet or amusing themselves in other ways.”

Dr. Manh admitted Bom’s stubby fingers place him at a disadvantage, but was positive that Bom would reap success just like other music talents with critical illnesses in the world.

“He faces tremendous difficulty, including a speech impediment, but he is endowed with good ears for music. There’s a long way to go, but we’ll stand by him,” the lecturer noted.

Quoc Tuan shared he has received ample encouragement and offers of financial support from local artists and netizens following the release of the ‘Dieu Uoc Thu 7’ show.

He said he had declined all the offers, except one from a colleague that introduces Bom to a hospital in South Korea that is willing to cover his medical costs.

One of the first in Vietnam to seek Apert treatment abroad, the seasoned artist has launched a network to share his experience and offer guidance to families with children suffering similar conditions.