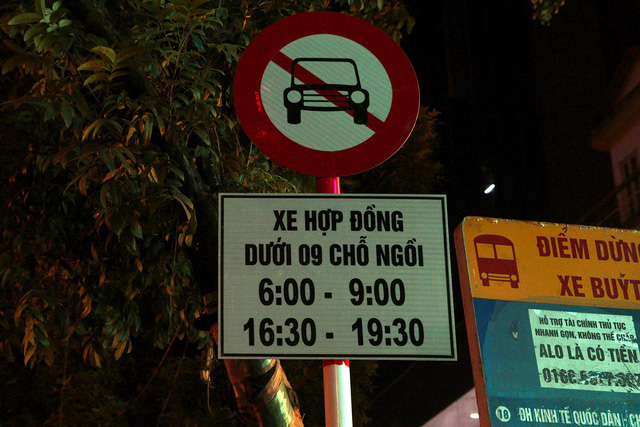 Grab and Uber will now be prohibited from using 13 streets in Hanoi during certain times of day, as part of the city’s efforts to reduce rush hour congestion.

The municipal Department of Transport has posted signs prohibiting cars with less than nine seats and operating as paid passenger transport vehicles from 13 routes during the morning commute from 6:00 am to 9:00 am and the evening commute from 4:30 pm to 7:30 pm.

Rideshare vehicles, such as Grab and Uber, are expected to be hit hardest by the ban.

“It is indeed difficult for competent authorities to identify when cars are being operated under transport contracts,” Vu Van Vien, director of the Hanoi transport department, told Tuoi Tre (Youth) newspaper.

A recent draft decree by the Ministry of Transport stated that cars from Grab and Uber must display company logos on their front and back windows.

These logos can be used to help traffic police officers tell the difference, Vien stated.

“If drivers intentionally remove a logo to drive on prohibited streets, they will be fined for both violations,” the official continued.

The ban is not permanent, Vien added, stating that it will be removed from routes where gridlock is reduced and applied to streets where congestion is exacerbated.

A similar ban was imposed last August on taxis in the capital in order to minimize rush hour congestion.