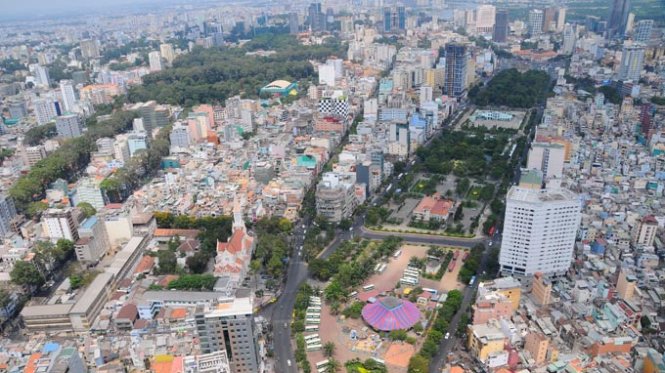 One major section of a public park in downtown Ho Chi Minh City will have all its commercial activities ceased in order to ease traffic jams, according to a recent proposal by the city’s Department of Transport.

The 23/9 Park, located in Central Business District 1, is a 23-acre area confined by a square next to Ben Thanh Market and three streets, and crisscrossed by two other streets that divide it into three parts.

One part, Section B, is known for its shops, restaurants, entertainment, and fairs.

The municipal People’s Committee has approved a detailed plan for the park, according to which the spot has a number of functions.

It first and foremost serves as a green, tree-covered public area for city residents, and then as a square for historical events.

Some of the secondary uses are being a terminal for the future metro system, an underground parking lot, and a commercial center.

However, the transport body has proposed stopping all fee-charging services and business activities taking place in Section B, due to its morphing objective.

A report by the department shows that the section’s busy commercial scene has veered off the park’s original prime function, caused disturbance to its quotidian activities and created local traffic congestion, a frequent problem in the city.

On closer examination, it found that the park’s chief function as a green environment does not figure in a proposal submitted by the investor currently building in the park.

The investor’s formal suggestion instead focuses on forming a parking lot and using the area for profitable purposes.

Additionally the report points out that the park has been simultaneously used and controlled by multiple companies, leading to an overlap of authority and the haphazard management of its construction and exploitation.

The department also suggested clearing the misused section prior to June 1 and performing a general makeover to the park pending a new plan.