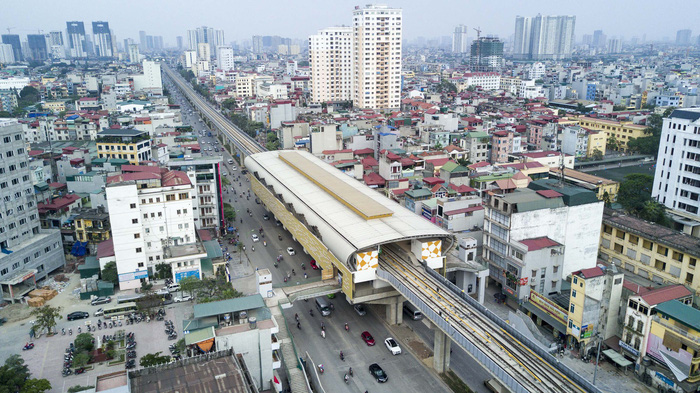 Experts in Vietnam have called for a government inspection into an infamous Chinese-funded urban railway line in Hanoi, after the project manager last week asked to have its launch date delayed for another three years.

Since construction of the 13-kilometer Cat Linh – Ha Dong line began in 2011, its completion has been put off five times, totaling six years of delay.

Dr. Pham Sy Liem, vice president of Vietnam Construction Association, put the repeated delays down to a lack of capital, which in turn could be attributed to erroneous initial estimates or mismanagement during the project’s development.

Either way, Liem said, the Ministry of Transport must take charge of launching a thorough inspection into the project to determine how its development capital went off the roof and who are to blame for such inefficient use of funds.

In early 2014, the project’s capital investment was raised to $868.04 million, forcing Vietnam to take an additional ODA loan of $250.62 million from China.

The Vietnam Railway Authority, under the transport ministry, is the project developer, whereas the China Railway Sixth Group, a subsidiary of construction conglomerate China Railway Group, is the EPC (engineering, procurement, and construction) contractor.

Under an EPC contract, the contractor designs the installation, procures the necessary materials, and builds the project.

According to Liem, the project developer must take the highest responsibility in making sure things go on schedule, as the Chinese contractor can’t keep putting off finishing the railway line without permission from Vietnamese management authorities.

Dr. Tran Dinh Thien, president of the Vietnam Institute of Economics, said it was important that the cause for repeated delays of the urban rail line be determined, instead of allowing such absurdity to happen time and time again.

“Postponements of such key projects only lead to cost overruns and many other immeasurable damages to the economy, and slow down our country’s economic growth as a whole,” Thien said.

Fifth time’s not a charm

The Cat Linh – Ha Dong line had been scheduled for official launch in June 2015, meaning construction was initially expected to less than four years.

However, in 2014 it was announced that the project’s launch would be delayed until 2016 with an additional cost of over $315 million.

In early 2016, the transport ministry and its Chinese contractor agreed on a new launch date in December the same year, before correcting themselves that the line would not be launched until early 2017.

In February 2017, the urban railway line’s completion was postponed for another year, with a new launch set for February 2018.

Last week, the project manager submitted a proposal for the line to begin a test run in September, setting the date for an official launch to be in 2021.

The test runs would include both no-load and loaded tests, according to a transport ministry report submitted to the government for approval.

Authorities would rely on test results to make necessary technical adjustments and determine a specific launch date for the entire line.

There is no knowing whether this postponement would be the last.

According to calculations made in May last year by the project manager, the rail line project was already paying at least VND1.2 billion ($53,000) in loan interests for each day of delay from the initial schedule.

But there could be less visible economic damages as well, experts say.

If the line had been put to use in 2015, residents in Hanoi could have gotten used to the public transport by now and traffic pressure on the Vietnamese capital could have already been relieved.

The saying that ‘third time’s a charm’ seems to have lost its charm on the people of Vietnam, who deserve an answer from responsible authorities for the continuous delays.