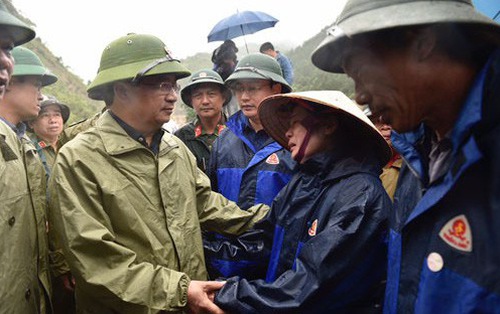 Read what is in the news today, June 27!

-- Achim Steiner, Administrator of the United Nations Development Programme (UNDP) and Vice Chair of the UN Sustainable Development Group, began a two-day visit to Vietnam on Tuesday on the occasion of the 40th anniversary of partnership between the UN body and the Vietnamese government.

-- The death toll from flash floods and landslides that hit Vietnam’s northern provinces of Ha Giang and Lai Chau over the weekend has risen to 19, with 11 still missing as authorities continue to search for survivors in torrential rains as of Tuesday.

-- Drug addicts in Ho Chi Minh City are getting younger as the increasing sophistication of drug dealership proves a challenge for authorities in their battle against the illegal substances, the director of the municipal social affairs department said at a drug prevention event on Tuesday.

-- Thirty-four construction inspectors in Hanoi were subject to disciplinary action between October 2017 and May 2018 for violations in the management of construction activities in the capital city.

-- Another patient has died from swine flu in Vietnam in less than a month, raising the death toll from the respiratory disease to three since the start of this year as people worry the disease’s virulence has increased.

-- A Vietnamese woman who had a condition that caused her breasts to grow six times the normal size underwent a successful medical operation in Hanoi on Tuesday to remove over 1.5 kilograms of matter from the oversized prominences.

-- The European Commission has decided not to lift a yellow card warning it has given Vietnam since October 2017for “not doing enough to fight illegal fishing” and said it will review the warning in January next year to see if more progress will have been made.

-- Vietnamese lender Eximbank has agreed to pay an advance compensation of VND93 billion (US$4 million) to a depositor who had more than $10 million stolenfrom multiple savings accounts by a former bank leader.

-- Vietnam’s telecom giant Viettel was lauded as an “exemplary model of good governance and qualified workforce” by Vietnamese Prime Minister Nguyen Xuan Phuc, who paid a visit to the military-run group on Tuesday.