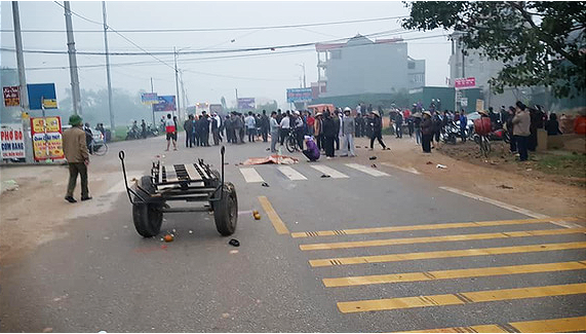 At least seven people were killed after a passenger bus crashed into a funeral procession in the northern Vietnamese province of Vinh Phuc, about 67 kilometers north of Hanoi, on early Wednesday morning.

The accident happened at an intersection along National Highway 2C in Trung Nguyen Commune, Yen Lac District, Vinh Phuc at around 5:00 am, according to initial information from the National Committee for Traffic Safety.

The passenger bus, which was traveling from the northern province of Dien Bien to Vinh Phuc’s Lap Thach City, hit a group of people who were part of a funeral procession, causing four of them to die on the spot.

Three others succumbed to their serious injuries at the hospital, while another person is still being treated.

The bus had some cracks on its windshield following the accident.

The Vinh Phuc police department, in coordination with its transport counterpart, is probing the cause of the crash.

Deputy Prime Minister Truong Hoa Binh, who is head of the national traffic safety committee, has extended his condolences to the families of the victims    .

According to news website VnExpress, it was foggy at the time of the incident.