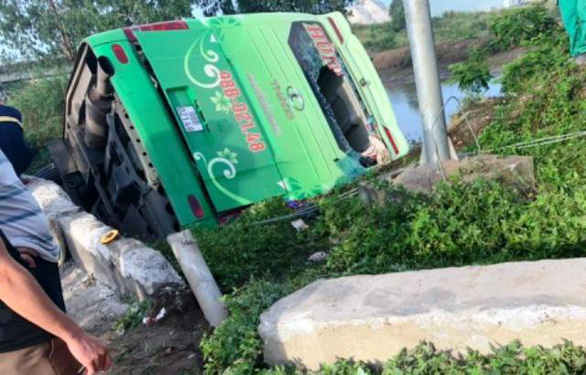 One dead as bus plunges into river in northern Vietnam

A passenger bus suddenly lost control and plunged into a river in the north-central province of Thanh Hoa on Tuesday, killing one passenger and injuring several others.

The bus was traveling on the 1A National Highway section passing Truong Lam Commune in Tinh Gia District, when it veered into the river at around 5:00 am, according to local authorities.

At the time of the accident, dozens of passengers on the bus were frantically looking for ways to escape the disaster.

Nearby locals, traffic police and other rescue forces in Thanh Hoa rushed to the scene to help break the vehicle’s windows, pull the victims out and rush the injured to the emergency room.

Early statements from the Tinh Gia authorities said that the accident caused one of the passengers to die on the spot while many others were injured.

Eight victims were admitted to a local clinic, before one of them was transferred to the Vietnam-Germany Hospital in Hanoi for emergency care due to serious conditions.

The driver was identified as 30-year-old Le Van Tuong, hailing from the northern province of Bac Ninh.

Thanh Hoa police are still investigating the cause of the accident.